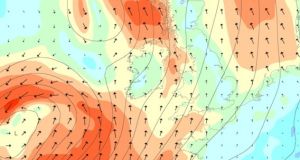 A wind speed map for 6am on February 1st. Photograph: MagicSeaweed

A status yellow wind warning has been issued by Met Éireann, with gusts of up to 100km/h predicted for Thursday.

The national forecaster said average wind speeds of 45-60km/h were expected with gusts of 80-100km/h. Winds will be strongest in coastal areas, it said.

The alert comes into effect at one minute past midnight and will remain in place until 6am on Friday.

Wednesday afternoon is due to be bright at first, but scattered rain in Munster and Leinster will spread to other areas this evening. Highest temperatures will be 8-11 degrees.

Rain will be focused on Ulster on Wednesday night, with the rest of the country remaining clear for a time.

Another band of rain will return by midnight and spread across the rest of the country, according to Met Eireann.

Wind speeds will pick up overnight and the lowest temperatures will be 6-8 degrees.