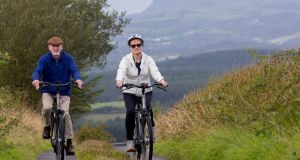 Barney Moran and Eileen Gibbons. Ms Gibbons says ‘can you imagine the outcry if someone proposed putting giant turbines near the Lakes of Killarney?’. Photograph: Brian Farrell

Kevin Duffy says the last letter his twin brother Michael wrote before his death in November 2018 was to Coillte pleading with the company not to proceed with plans for 10 “giant” wind turbines close to the family home place on Corry mountain on the Sligo/Leitrim border.

Opponents of the Croagh wind farm, including local residents and tourism businesses, say the proposed 168m turbines are 65 per cent larger than those dotted on neighbouring peaks in the Arigna area, and will comprise an industrial development on a scenic rural landscape.

“I do believe this is a pre-emptive strike by Coillte who hope to get their planning application in when the 2006 Wind Energy Development guidelines are still in place,” said Mr Duffy.

New guidelines which are expected to deal with such issues as noise, flicker and set-back distances were delayed following the publication of updated World Health Organisation noise standards “and the need to focus on certain Brexit-related planning issues”, according to the Department of Housing, Planning and Local Government.

A spokesperson said that the aim was to issue the new guidelines in the final quarter of 2019, and “in the meantime, the current 2006 Wind Energy Development Guidelines remain in force”.

Coillte says the Croagh wind farm is being designed based on the new draft guidelines published in 2017. However, campaigners say the planning authorities may have to make a decision based on the 2006 rules.

Mr Duffy said that his brother, who died following ill health with heart and lung problems, was a retired air steward. He had seen most of the world, but believed the beauty of the area where their mother’s family lived for 200 years was unrivalled.

He said he and Michael had been raised in the UK as the children of “economic migrants”, but always regarded Garvagh, Co Leitrim, as “home” having spent childhood summers there. After inheriting the property in 1987, they had spent most of their life savings preserving the land and dwelling.

He said they never used chemicals, and as a result the corncrake was back on their land.

Mr Duffy said his main concerns were noise, flicker and being dominated by huge turbines higher up the mountain behind him.

“People have been driven mad by the noise from turbines. From my front door I can see six counties and Benbulben and Lough Gill. I was hoping to end my days here, but that won’t happen if this goes ahead”.

Adrienne Diamond, a local resident who with her partner Graham Robertson runs Adventure Gently, a company providing guided canoe trips , says the proposed turbines will be seen from local waterways such as Lough Gill and the river Bonet.

“In the canoes you get to see places people don’t normally go to,” said Ms Diamond, who brings the canoeists around the lake isle of Innisfree and other islands on Lough Gill. “Unprompted they always comment on the unspoiled landscape.”

She returned to live near Dromahair 10 years ago, and lives just under 800m from existing turbines. “They are a lot smaller [than the proposed new ones] at 104m, and we do get noise when there is a south wind.”

Ms Diamond, who is also an artist, said that far from being oblivious to the need for sustainable energy, she and her partner live a green lifestyle. “We live simply. We have no television, no microwave. What we want is discussion and debate. Our concern is that this will be a test case and other giant wind turbines will follow.”

Turn in his grave

Eileen Gibbons, who runs Leitrim-based Electric Bike Trails, said that as a former county council environmental officer her job had been “to protect our rivers and lakes”.

She said Coillte should not be allowed to erect “industrialised turbines” in an area of such outstanding beauty so close to the Lough Gill Special Area of Conservation. “WB Yeats would turn in his grave.”

Ms Gibbons said the area was comparable to the lakes of Killarney in terms of natural beauty, “and can you image the outcry if someone proposed putting giant turbines near the Lakes of Killarney”.

Local postman Pat Munday is a member of the Save Leitrim group which is opposed to the plantation of Sitka Spruce forests in Co Leitrim. “It’s an irony that a forestry company is now imposing turbines on the people left here.”

He said there was already “a cluster of almost 90 turbines” in a triangle from Arigna to Drumkeeran, and almost as far as Dromahair. “Why don’t they try and upgrade the existing sites and make them more powerful rather than adding more?”

Retired accountant Barney Moran, who lives close to a nearby wind farm, said his enjoyment of his retirement home was being affected by noise from the existing turbines. “We had planned to spend less time in Dublin and more in this area, but that won’t happen now. At least we have a choice, but our neighbours haven’t.”

In a statement Coillte, which manages 440,000 hectares of land, said it was uniquely positioned to make a significant contribution to the decarbonisation of Ireland’s economy and to achieving goals outlined in the All Government Climate Action Plan published in 2019.

The company confirmed it was designing a potential 10-turbine wind farm at Croagh, “where we have been engaging closely with near neighbours since the project’s first conception in mid-2018”.

Coillte said that under the current guidelines minimum set-back from a turbine to a residential dwelling was 500m. However, the 2017 draft guidelines which they were adhering to proposed to increase this to four times maximum turbine tip height – a set back of 680m for Croagh.

Coillte said it hoped to lodge a planning application to both Leitrim and Sligo County Councils in the final quarter of this year.

In his letter to the company last year, Michael Duffy wrote: “The place I have always done best is here in Garvagh, with the unique peace and tranquillity of our home and the cleanest air in the world.”

He appealed to Coillte to “think again”.