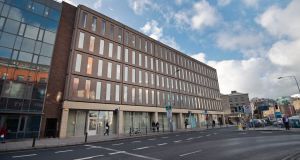 In a deal worth up to €36 million, Trinity College will seek contractors for the demolition of Oisín House on Pearse Street and its redevelopment for student housing.

However, Dublin City Council has raised concerns about the impact on the surrounding architectural conservation area of the seven-storey block proposed by the university.

Trinity applied to the council last November for permission to demolish and redevelop Oisín House, a five-storey 1970s office block that has been leased to the Department of Social Protection since the university bought it 20 years ago.

The project would also involve repairs to the adjacent historic Printing House and the removal of extensions to that protected structure, which dates from 1733.

The university has advertised its intention to seek contractors to build the scheme, which it says will have a value of €24 million-€36 million before VAT.

The move came just days after council planners raised concerns about the visual impact of the development.

The council did not object to the actual removal of Oisín House, which, it said, is not “of the high end” of 20th-century architecture.

An Taisce has also submitted concerns to the council over the development, which it said appeared as a “crude jump” in scale in the Pearse Street streetscape in a “highly sensitive location approaching College Green and close to the Old Squares of the college”.

The Oisín House scheme is the latest development in TCD’s plans to upgrade its Pearse Street frontage.

Last year it was granted permission for a €70 million business school farther down Pearse Street towards Westland Row. This will involve the demolition of the Luce Hall sports block, which dates from the 1970s, and the 1990s Simon Perry engineering building.

The business school will also involve the regeneration of protected structures the university previously wanted to demolish. These are six three-storey terraced buildings dating from about 1825, built with ground-floor shops and residential accommodation on the two upper storeys.

In recent decades the college had bricked up these buildings and other historic shopfronts on Pearse Street, presenting a bleak and lifeless frontage along much of the southside of Pearse to west of the overhead railway line.

Trinity has in the past defended its treatment of Pearse Street, saying its decline as a shopping street had much to do with the constant heavy traffic, the lack of parking and safe set-down facilities for shoppers, and unpleasant environment for pedestrians.

As a result, it said business people who held leases from Trinity gradually surrendered them because they no longer saw their businesses as viable in that environment.

Earlier plans had sought the demolition of the terrace, with a 2011 scheme proposing the relocation of the shopfronts to further up the street, but these were refused.