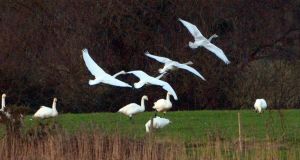 Ireland will attempt to capture an accurate snapshot of thousands of individuals across the country in January as part of a major 2020 census – but this time around it is not humans being counted.

In the middle of the month, BirdWatch Ireland, the National Parks and Wildlife Service and scores of amateur enthusiasts will try to count every single visiting swan as part of a major pan-European effort that will not only monitor flock sizes but lend valuable insights into global warming.

The focus is on Whoopers and Bewick’s which migrate south for the winter, not the native Mute swan, common to Irish waterways.

If you can stop in Germany and not fly to Ireland, you are saving yourself a lot of energy

The flight of the Bewick’s will be of considerable interest – experts believe the species, which migrates from Russia, is soon to be a thing of the past on Irish shores due to warming temperatures in more northerly climates.

In mid-December a group of about 12 were spotted in Co Wexford, and may constitute the last of our regular visitors, with others opting to settle elsewhere.

“It’s kind of inevitable that we will lose them as a regular species,” explained Brian Burke of BirdWatch Ireland, who is co-ordinating the 2020 census.

This year I am asking them to look a little bit further and if you don’t find your swans, just keep looking

“I would expect that this is all we will see: in the last couple of years it’s just been that small little group, and all in Wexford. If you can stop in Germany and not fly to Ireland, you are saving yourself a lot of energy.”

Although once outnumbering Whooper swans, the decline in Bewick’s has seen their number drop from a couple of thousand in the 1980s to just 21 five years ago.

The census has been running since the 1980s – on the weekend of January 11th and 12th, birdwatchers across northern Europe will head out and start counting, focusing both on wetland areas where they are common and more random grassland locations where they are not. In Ireland, more than 500 sites will be visited.

Whooper swans, with the loud calls they make that inspired the name, generally prompt farmers and members of the public to report their locations and numbers. Social media is expected to play a significant role in the 2020 census.

In contrast with the declining Bewick’s, Whoopers have been on the increase in Ireland. Breeding in Iceland during the summer, they spend winter here and in the UK. The 15,500 recorded across the island in 2015 represented almost half of the total European winter population.

They arrive each year as of October, feeding and resting across the country before returning to Iceland in the spring. The Whooper has an important role in Irish culture too, with a presence in folklore and inspiring stories such as the Children of Lir.

During the last count they were found in every county except Dublin, with some of the most important sites including the Shannon Callows in Co Offaly, the Wexford Slobs, the River Suck in Co Roscommon, Kilmacshane in Co Galway and the Cashin River in Co Kerry.

“This (census) is a bit more of driving around the countryside looking for these types of swans,” said Mr Burke.

“People would count their (regular) patch every year but this year I am asking them to look a little bit further and if you don’t find your swans, just keep looking.”