Sum of €1.5m toward planning costs of cruise berth at Dún Laoghaire 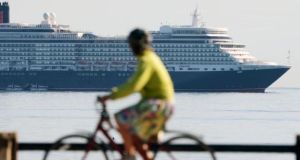 Dún Laoghaire-Rathdown County Council allocated €1.5 million towards the planning costs of a large-scale cruise berth in Dún Laoghaire harbour in the hopes of a significant economic payback, but is no longer able to defend that position, a planning inquiry has been told.

Dún Laoghaire TD Richard Boyd Barrett told the An Bord Pleanála inquiry he wanted to question the council’s support for Dún Laoghaire Harbour Company’s application for a 400m cruiser berth and dredging scheme in and outside the harbour.

However, he was told by Rhona Naughton – senior planner with Dún Laoghaire-Rathdown County Council – there was no one present at the inquiry to answer questions on the basis for the contention that the cruise ships would provide an economic uplift.

Mr Boyd Barrett said he was disappointed as county management had proposed the allocation of €1.5 million, telling councillors cruise ships would represent a “substantial economic benefit to the town and the region”. But he said “we have no one from the council willing to back up that assertion”.

Mr Barrett also told by Ms Naughton that moves by Dún Laoghaire-Rathdown county councillors to halt the harbour development have no legal standing.

A majority of councillors voted in recent weeks to insert a ban on cruise ships longer than 250m in the draft county development plan, as well as a provision to encourage the development of the harbour as a centre for national and international water sports.

But Ms Naughton said the draft county development plan would not come into force until April 2016. And there was no certainty at this stage that the ban on larger cruise ships would survive the ongoing drafting process.

She said the council support of the planning application was “within the confines” of the county development plan 2010 – 2016 and she could not comment on what might be included in the draft plan when it becomes law.

A representative of the harbour board interjected to say An Bord Pleanála was specifically precluded from considering the draft because as yet it had no legal standing. He also said the harbour company was not at this stage accepting that it had received the “quantum” of payments from the council “as put on the record here”.

Pressed on the references in the council’s submission to the harbour being a protected structure, she said it was “an unfortunate use of the term, rather than saying [the harbour] is a complex of protected structures. Ms Kennedy disagreed with the planning inspector’s suggestion that the term was “at best misleading”.

As the inquiry adjourned Liam Owens for the combined sailing clubs in the harbour said he would like more clarity on the number of payments made by the council to the harbour company, over the last three years, in relation to the cruise berth proposal.