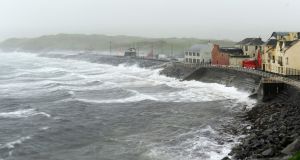 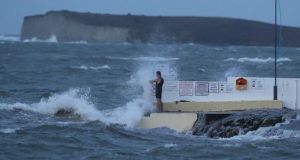 A status orange wind warning is in place until Wednesday morning, with damaging gusts expected and a risk of coastal flooding from Storm Gareth.

Met Éireann issued its second-highest level of alert for the counties of Donegal, Galway, Leitrim, Sligo and Mayo, with gusts of up to 130km/h expected on Tuesday evening.

The warning is effective from 5pm on Tuesday until 9am on Wednesday, with the warning updated to include Co Galway at 4.56pm on Tuesday.

There will also be heavy rain mixed with hail and thunder as temperatures will struggle to reach 4 degrees in the northwest on Tuesday.

Wind speeds along the west coast and north west of the country were reaching gusts of up to 110 km/h on Tuesday afternoon.

At Malin Head, Met Éireann recorded gusts of wind reaching 60 knots, the equivalent of 110 km/h, and between 38 and 60 knots at Mace Head, Co Galway.

Even inland wind speeds were high, with top gusts of 47 knots recorded in recent hours by forecasters at Knock weather station, Co Mayo.

A yellow wind warning is also in place for Munster, Leinster, Cavan, Monaghan and Roscommon between 5pm on Tuesday until 12 noon on Wednesday. Met Éireann said during this period gusts could reach 110km/h in these areas.

Met Éireann forecaster Klara Finkele advised the public to stay away from exposed coasts and high ground where the status orange weather warning is in place. She warned that strong gales and high seas will bring the possibility of coastal flooding due to high seas.

Ferry services in the north west of the country were cancelled for Tuesday evening, due to the heavy winds and high seas.

#StormGareth has been named by @MetEireann and is forecast to bring strong winds and heavy rain to the UK later on Tuesday and into Wednesday #weatheraware pic.twitter.com/sdpxvNNWy1

The Arranmore Ferry Service has suspended trips between the mainland and the Co Donegal island, due to the weather. The last trip on Tuesday returned to the mainland at 12:30pm, and all evening sailings were cancelled, a spokeswoman for the ferry service said.

The ferry service will make a decision later on Tuesday evening about sailings to the island on Wednesday, depending on the outlook of the weather.

A precautionary inspection will be held at 8am on Wednesday morning to decide whether the second day of the horse-racing event, Cheltenham Festival, can go ahead in light of forecast strong winds, officials at the Gloucestershire racecourse have announced.

Confirming plans for a precautionary inspection at 8am, Ian Renton, regional director for the south-west region of the Jockey Club said: “Strong gusting winds are forecast for the area on Wednesday, but their precise strength and location are not possible to predict in advance.

“We are currently looking at forecasts of gusts in excess of 45mph [72km/h], which may present challenges out on the track and around the site, dependent on their direction. We will therefore do a precautionary inspection at 8am tomorrow.”

Mr Renton added: “While our focus is to race tomorrow, should the weather conditions not allow this we would stage the whole of Wednesday’s card on Saturday.

“This would allow for all seven scheduled races to be restaged to provide participants with their opportunity to race at the festival and with originally advertised conditions, which would not be possible in the two remaining days.”

Rest of the week

The unsettled weather is likely to continue for the rest of the week. Thursday will be a wet day and Friday will be cold.

St Patrick’s weekend looks like it will be cold and showery with a chance of sleet or snow in some places. It will be less windy than of late with widespread frosts at night.

Ahead of the expected weather, the RSA has issued the following advice to road users:

– Beware of objects being blown out onto the road. Expect the unexpected;

– Watch out for falling/fallen debris on the road and vehicles veering across the road;

– Control of a vehicle may be affected by strong crosswinds. High-sided vehicles and motorcyclists are particularly vulnerable to strong winds;

– Drivers should slow down on wet roads and allow extra distance between you and the vehicle in front;

–Drivers should allow extra space between themselves and vulnerable road users such as cyclists and motorcyclists as they may be blown off course by strong winds, and

–Drive with dipped headlights at all times.