Shell welcomes inquiry into claims of alcohol delivery to gardaí 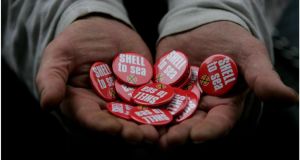 Shell E&P Ireland says it welcomes the Garda Síochána’s examination of a contractor’s allegations that large quantities of alcohol were delivered on its behalf to Belmullet Garda station in 2007.

The lead Corrib gas project developer was responding to yesterday’s Irish Times report that the Garda appointed a senior officer over a month ago to examine the claims made by contractor OSSL.

OSSL, managed by Desmond Kane of Glasgow and Neil Rooney of Belfast, provided services to the Corrib gas project from 2002 until 2010.

The “examination” by Supt Thomas Murphy of Swinford Garda station was initiated subsequent to inquiries already conducted by the Garda into allegations that “alcohol was distributed to members of An Garda Síochána on behalf of Shell E&P”.

The Garda had said at the weekend it “found no evidence” to back up the allegations made to the district officer at Belmullet Garda station on December 7th, 2011. However, it confirmed to this newspaper on Monday a new examination had been initiated.

Claim drinks worth €35,000
Last Sunday’s Observer newspaper reported the deliveries on Shell’s behalf by OSSL included a drinks consignment worth €35,000 to Belmullet Garda station in December 2007.

This was six months after one of the most fractious Corrib gas protests, in which a number of people were injured at Pollathomas pier. It led to a Garda Ombudsman investigation and recommendation – not acted upon to date – that a senior officer handling the protest be disciplined.

Shell E&P Ireland (Sepil) said in a statement yesterday that OSSL’s “allegations” were “first raised in the context of a contractual dispute in 2010 following the termination of OSSL’s original contract to supply subcontracting services during the construction of the Corrib gas terminal in Co Mayo”.

The company said “invoices for alleged alcohol deliveries in 2007 were not generated by OSSL until August 24th, 2012, following the settlement of the contractual dispute earlier the same month”.

“To date, OSSL have not been able to supply receipts or any form of written evidence to support their claims,” the company said, and it was “satisfied that OSSL was treated fairly as a contractor on the Corrib gas project”.

“Furthermore, Sepil is satisfied that the allegations made by OSSL have been investigated and no evidence has been found to substantiate them,” the company said. “We hope An Garda Síochána’s involvement will bring this matter to an end.”

However, Mr Kane has claimed that Shell E&P destroyed evidence which supports the allegations. He told The Irish Times that Shell E&P always requested receipts for deliveries and “favours”.

Mr Kane said Shell E&P’s practice was to read and then destroy the receipts. The company was now demanding proof of something it had destroyed itself, he said, adding that, in February 2011, OSSL sought confirmation from the gardaí that it had delivered “festive gifts” to Belmullet Garda station.

In a letter to the Belmullet station, Mr Kane said Shell E&P had failed to reimburse OSSL for their outlay in delivering the items in December 2007. OSSL eventually invoiced Shell in August 2012 for the alleged deliveries.

Mr Kane said the invoice had been drafted out of frustration with Shell E&P’s failure to pay for the deliveries. The invoice details two trips to Northern Ireland to purchase thousands of euro worth of alcohol which was delivered to Belmullet Garda station and to a Garda superintendent in Athlone.

Two human rights organisations, Frontline Defenders and Afri, and Corrib gas protest group Shell to Sea have called for inquiries into the allegations in the Observer.

Code of conduct
In a further statement last night, Shell said it had a long-established set of business principles and a supporting code of conduct “which are fundamental to the way we conduct our business and drive the behaviour expected of every employee.

“Shell E&P Ireland Ltd conducts all of its business in accordance with these principles.”

A spokesman for Frontline Defenders said that, while it could not comment on the veracity of the allegations, the issue of lack of trust by the north Mayo community in gardaí policing the gas project had arisen during its report by barrister Brian Barrington on the project in 2010, and again when it participated with Amnesty International in independent monitoring of protest for six months of 2011.

1 Coronavirus: 396 more cases as public is urged to help protect ‘older and vulnerable’
2 The Sack of Balbriggan: The burning of a town that shocked the world 100 years ago
3 Gardaí break up rave attended by 60 people at Dublin flat complex
4 The FinCEN files: The billion dollar a month money trail
5 Founder member of the Alliance Party dies from Covid-19
Real news has value SUBSCRIBE