Plans to build 512 apartments in Howth lodged with Bord Pleanála 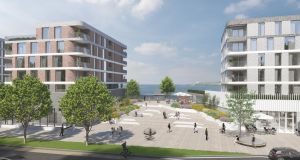 An image of the proposed development at the former Techrete site in Howth, Co Dublin. Image: courtesy Marlet.

Plans to build more than 500 apartments in Howth, Co Dublin, have been lodged with Bord Pleanála.

The application, which lists costs of €135 million, is the fourth attempt to redevelop the derelict former Techrete factory site near the village’s Dart station.

The 512 units sought in the application is substantially higher than in previous efforts to build on the site, which have been met by objections from locals concerned about the heavy traffic already experienced in the area.

The application was lodged by Atlas, a subsidiary of developer Marlet, under strategic planning rules, which means it bypasses Fingal County Council and goes straight to the board.

The proposed development includes a gross floor area of 48,252sq m on a 2.68 hectare site. It would include 512 mainly one- and two-bed apartments in blocks totalling eight storeys in height, with 439 parking spaces and 1,335 bike spaces.

The plan also includes a publicly accessible walkway and cycleway to the north of the site, a civic plaza, a landscaped park and communal gardens. The commercial aspect includes a 1,705sq m anchor unit, a restaurant, a retail unit and a café.

Regarding pressures on schools, Atlas says the development “could give rise to” 72 children of primary school age and 48 of secondary school age.

“However, it is very unlikely that the numbers will be that high. It is anticipated that a far higher percentage of the development will be single people, pre-family couples and empty-nest families.”

Social Democrats councillor Cian O’Callaghan said there was support locally for the development of the derelict site but it must make a “positive contribution” to the community.

“The understandable concerns of the local community about how these latest proposals to intensify development at the site will impact on the village character of Howth and traffic congestion must be addressed.”

A spokesman for Marlet said urban development required a “delicate balance” between the required car parking and integration into established traffic flows “while at the same time following national policy towards reducing car-usage and utilising existing public transport”.

“We were very conscious of this in making this application,” he said.