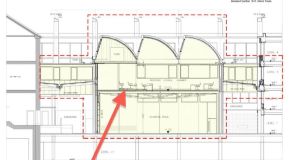 A drawing of the proposed alterations to the concourse of Dún Laoghaire-Rathdown County Hall. The arrow points to the location of the proposed new floor. Photograph: McCullough Mulvin Architects 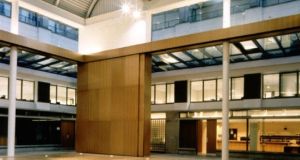 The concourse of Dún Laoghaire-Rathdown County Hall, into which it has been proposed to install a new floor. Photograph: McCullough Mulvin Architects

One of the design firms behind Dún Laoghaire’s award-winning county hall has condemned plans to insert an intermediate floor in its atrium to accommodate a new council chamber.

The deadline for making submissions on the plan, which has also been criticised by an architect with Dún Laoghaire-Rathdown County Council, is by close of business today.

“If built, this will be architectural vandalism of the most permanent kind,” said the council’s Dominic Coyle.

McCullough Mulvin, the Dublin architects who designed the hall in partnership with RKD Architects, similarly described it as a “destructive idea”.

Proposal
The proposal betrayed a lack of understanding of the design and “would result in a significant diminution of the quality of the public realm, planned and executed by the local authority, who should be protecting it”, they say.

The proposed new chamber – needed for an additional 12 councillors under local government reforms, would replace the Victorian one in the adjoining town hall, which dates back to the days of Kingstown town council before the name was changed to Dún Laoghaire.

In a letter to Declan McCulloch, senior executive officer in the council’s planning department, Niall McCullough and Valerie Mulvin say they object to the Part 8 proposal “in the strongest possible terms” because of its negative impacts on their award-winning building.

“The concourse was the heart of the project; it represented the people at the centre of the county hall; it provided a totally unexpected cultural public space. It had architectural drama – like a public building or town hall at the centre of an Italian town.”

The architects also point out that four solid sections of the concourse “act as a key part of the natural ventilation regime, bringing fresh air down into the covered space . . .

“Instead of one great space, there will be two bad ones . . . The upper section reserved for the councillors (who will be sitting directly above the people) will be low; the large areas of glazing, which at present allow cross views from side to side, will be reduced.”

This would “dramatically reduce the transparency of the whole county hall complex. Visitors would no longer have their spirits soar in the cubic volume; instead, they will have to creep in under the lowered ceiling to an ill-proportioned space without natural light.”

Query
They query why potential locations for a larger council chamber in the town hall were not considered, saying this “bears the mark of very cautious conservation practice, where old things tend to be treated in a way that effectively renders them redundant for modern life”.

Former cathaoirleach and minister for education Cllr Niamh Bhreathnach said the council’s management had chosen to “ignore the opinion expressed by the elected councillors on this proposal”, adding that enlarging the existing chamber should be considered.

Management maintains this would be impossible because the old town hall is a protected structure. “We have to find a solution to accommodating a larger council as we can’t do so in the current chamber. The proposal is an innovative solution,” Mr McCulloch said.

He declined to comment further, pending submissions from the public and councillors.