Plan to put students at heart of Dún Laoghaire’s economy 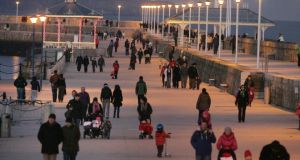 A new strategy to redesign Dún Laoghaire would divide its main thoroughfare into four distinctive retail quarters and place students at the heart of the town’s economy.

The 20:20 Vision report is a five-year plan embracing high-tech innovation, transportation links, public safety and a shift toward an “18-hour economy”.

It was commissioned eight months ago by the local Business Improvement District (Bid) which hopes it may be incorporated into the local area development plan at some stage this year.

Due to be published next week, it will then be circulated to council planners and officials.

The key recommendation is the subdivision of George’s Street, the town’s main half mile commercial thoroughfare.

These sub-sections or quarters would focus on differing retail aspects, covering home or interiors, general retailers, existing commercial enterprise and an artesian quarter.

Atmospheric street lighting, diverse pavement designs and colour, as well as “characteristic outdoor leisure areas” would be used to set each apart.

“We believe if we can get the high street right there will be a flow down to Patrick Street and many of the side streets in the town,” explained Derek Hughes of 180 Degrees, the firm that compiled the report and presented it to the Future of Towns in Ireland Summit 2015 in Dún Laoghaire.

It is one of the most ambitious undertakings of the group since it was established a year ago. Since then, the organisation says Dún Laoghaire has seen the opening of 56 new businesses and a related reduction in vacant retail premises.

Its inception was not without opposition in some corners of the business community, however the organisation counts a reduction in rates and free wifi throughout the town amongst its achievements.

Regarding this latest plan, chairman Don McManus told The Irish Times: “Of course some [businesses] will say that this is the wrong direction [but] if the majority feel this is the way to go then it must go. It’s a democratic situation.”

Of the 212 retail units in the town, 139 of them are situated on George’s Street.

The plan also seeks to focus on a “hyper local model”, an area with a population of almost 4,500.

Within this catchment, a shuttle bus service has been pitched that would run every 15 minutes from 8am to midnight connecting residents from areas like Deansgrange, Glenageary and Monkstown, and with the local Institute of Art, Design and Technology (IADT) acting as terminus.

The significant student body here is seen as fundamental to the town’s economy and the IADT has expressed interest in locating a faculty in the centre, the summit heard.

The stops will also have a bike-share system similar to Dublin Bikes in the city centre. Designated cycle lanes will be created throughout the town.

“It’s about mobility and permeability within that core group,” said Mr Hughes.

Smart technology, a property forum and retail committee are also included in the strategy, while culture, sporting events and entertainment will be relied upon to fuel a new “18-hour economy”.

“Students downtown is critical and it all leads to being a smart town,” said Mr Hughes.