Opposition mounts to building of wind farms in midlands 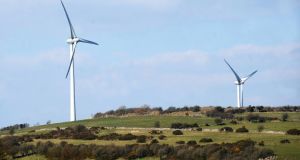 The proposals to build 2,300 wind turbines in the midlands to serve the UK market is already proving to be contentious even before a single one is erected.

Opponents are objecting on two main grounds . The first is the aesthetic principal of having these artificial leviathans in places often of great natural beauty. The other is noise.

Noise limits for wind farms are governed by Energy Technology Support Unit (ETSU-R-97) guidelines introduced by the UK Government in 1997 and adopted here.

They recommend a lower fixed limit of 45 dB (decibels), about the equivalent of a very quiet conversation or the sound your hard drive makes as it warms up, or a maximum increase of 5dB above background noise. This is important as a gale force wind will generate up to 80dB naturally.

Martin Lester from the UK Institute of Acoustics (IoA) says noise should not be a problem if a wind turbine is set back at least 250m-300m from a house, but it depends on the number of turbines and their height.

The ones proposed for the midlands are 185m high. Because they are bigger, they will generate more noise. Paradoxically they are – by virtue of their height – further away from houses than smaller turbines.

Mr Lester, who lives in Northern Ireland and carries out noise assessment on wind turbines for planners, said “in general it shouldn’t be a problem” if they are set back far enough from homes. “You’ll get certain turbines that are noisier than others or if they have certain characteristics, they need to be set back further.”

How far, though, is a matter of contention.


Contentious UK noise research
In the first academic study of its kind, the University of Nottingham carried out research among more than 1,000 British households living within a kilometre of a small wind turbine.

They measured the noise from the turbines, used computer modelling to predict what a resident should be able to hear and then questioned local people about the impacts of the turbine using a questionnaire.

About one in 10 of those who responded reported health problems such as insomnia, but not for the reasons one might believe.

The researchers concluded that it was not the turbines that caused the problems, but the personalities of those involved.

Those who exhibited signs of neuroticism in the questionnaires that accompanied the survey were more likely to complain of noise.

Dr Claire Lawrence from the University’s School of Psychology said: “We measured the actual noise from the turbines and used environmental noise modelling software that helped us to predict how much sound is actually heard by those living in the vicinity. We found there was no relationship between the ‘real’ level of noise and reports of ill health.”

The study is already contentious, not least because it only deals with small turbines, while the ones planned for the midlands are monsters in comparison.

Standing some 735m as the crow flies from a 100m high turbine, the sound of a wind turbine in fairly windy conditions is like a persistent, swishing noise which competes with the noise of the wind itself for attention.


‘A droning, pulsating noise’
The noise is very real to Michael and Dorothy Keane, who live in the shadow of wind turbines in rural Co Roscommon. Their house is a kilometre and a half from a main road. They retired to their isolated cottage in 2004 not realising that planning permission had been granted in their area for three turbines.

In 2011, a company called Gaelectric erected two turbines within viewing distances of their home.

Inside their home, the turbines sound like the distant rumble of a washing machine in the basement when you are in the top floor, but Michael Keane said that noise was only a “one or a two out of four” in comparison with how noisy the turbines can get.

Dorothy Keane said there are certain people sensitive to the noise of turbines “and it seems I’m one of those people. I can hear this thing all of the time in my head. It is like a jitteriness in my chest, a droning pulsating noise all the time.”

She describes it as being like the sound of “two freezers in my head at all time. All we want to do is get back to where we were and get back to a point where we can go to bed without a sleeping tablet. Going to bed at night is like going into a torture chamber”.

The couple have gone to extraordinary lengths to block out the noise. Their bedroom window has a duvet and four layers of curtains, but still it creeps into their house and into their heads.


Criticism of study
Mr Keane is scathing of the University of Nottingham study. “These are Mickey Mouse turbines that wouldn’t power three electric heaters. Why would you waste academic time on turbines as small as these? There’s simply no comparison with what we have and what is proposed for the midlands.”

A representative from Gaelelectric visited the couple and said they were committed to resolving any issues.

They have promised to appoint two independent consultants, one for themselves and one for the Keanes. The couple are now trying to source a sufficiently qualified consultant to carry out acoustic tests.

Mr Lester said an amount of research has been done into the phenomenon of people who are particularly sensitive to the noise of wind turbines, but there have been no concrete conclusions.

“I know a number of people have very strong feelings about it. They consider it does exist. It may relate more to wind farm rather than individual turbines,” he said.

“If you identify a noise which is an unwanted sound, then the human brain can pick that out even when it is, as a measured sound level, very much quieter than everything else that is going on. You will get people who think that a certain noise they can hear is a major problem.”

1 Midlands lockdown: ‘Why shut down Offaly and leave Dublin open?’
2 Regulations allowing gardaí enforce restrictions in Kildare, Offaly and Laois signed into law
3 Sand-hued cyclepaths changing the face of south Dublin coast
4 Inside the dog-trafficking trade: ‘After drugs, it’s guns, then pups’
5 Meat plant clusters may be down to softly-softly approach
Real news has value SUBSCRIBE