Rubber inserts could prevent bicycles getting caught in track grooves

Olivia Kelly reports on the challenges and dangers facing cyclists in Dublin as the new Luas Cross city line opens this weekend. It sees the extension of the Luas Green Line and the creation of an interchange with the Red Line. Video: Bryan O'Brien 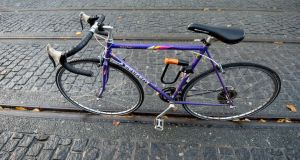 The cost of the systems varied but could be in the range of €800,000 per kilometre, not including the costs of replacing the rubber strips when they wore out,

In January 2012, two months after the Luas Cross City got Government sanction but six months before it secured planning permission, the NTA produced a report on the “Co-existence of Cyclists and Trams”.

Engineering consultants Jacobs had been commissioned to examine the implications of facilitating cyclists in the tram corridor and what could be done to prevent bicycle wheels getting caught between track grooves – the area known as the “flangeway”.