Met Éireann warns further ‘nasty’ weather may be on the way 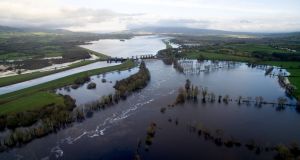 Flooding around the Parteen Weir in Co Clare yesterday in a view looking northeast towards Killaloe. Photograph: TISC

Met Éireann has warned of the the potential for more “nasty” weather over the next week.

A status yellow rain warning was issued for Cork, Kerry and Waterford last night. Rainfall totals of up to 30mm were forecast for overnight and today.

Earlier, the possibility of a more seroius orange rain warnings for the south and southwest had been raised by forecasters.

Water levels in the lower Shannon are expected to gradually fall after hitting a peak yesterday but other areas are still braced for rising waters over the coming days.

At a briefing of the National Emergency Co-ordination committee yesterday, a spokesman for the Office of Public Works (OPW) said river levels in the lower Shannon catchment from Lough Derg to Limerick would peak yesterday but continue rising in the middle catchment, which includes Athlone, over the early part of this week.

“That rate of rise is about half of what we were observing (on Sunday) in the central catchment area . . . but I would stress that the levels have still risen and we are still in a severe flood situation on the Shannon catchment,” said Jim Casey of the OPW.

Met Éireann’s Gerald Fleming warned a series of approaching fronts could develop into serious weather events, which could cause flooding in areas which were not yet under water.

“At the moment none of the individual events are at the orange status serious warnings level, but we’ll have to keep a very close eye,” he said.

“We’re in a situation where a number of those rain events have the potential to turn nasty,” he added.

Estimates show about 100 people have applied for the Department of Social Protection’s humanitarian assistance scheme, which provides food, clothing, water and temporary accommodation for flood victims, and a similar number of firms have requested assistance from the €5 million relief programme for traders.