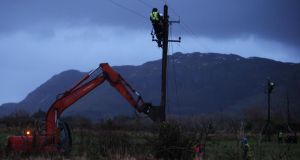 The clean-up in the wake of Storm Rachel, which claimed one life and left thousands of homes and businesses without power, continues this morning.

Met Éireann reduced its status red weather warning as the severe winds abated and the worst of the conditions passed.

It follows a 24-hour period that saw power outages, fallen trees, flights diverted and schools closed, with the west and northwest regions of Ireland the worst hit.

In Lisburn, Co Antrim, a driver was killed when a tree fell on his van on the Hillsborough Road. Elsewhere, two teenage girls were treated for non-life threatening injuries after being blown in front of a bus in Belfast.

While there was criticism of the severity of weather warnings in some areas, much damage had been caused when wind gusts reached as high as 150km/h from Wednesday night into Thursday morning.

The ESB said crews working in hazardous conditions had reduced the number of customers without power from 17,000 to 2,500, although hundreds more were expected to be without power overnight.

Weather conditions are expected to normalise today with no cause for concern this weekend.

“It wasn’t as bad as the storm on the 12th of February last year, which was the most recent benchmark,” said Met Éireann’s head of forecasting Gerald Fleming.

“It was similar in severity to other storms last winter. However, the storms last year brought a lot of flooding, but that didn’t happen this year because the high tides were not there at the same time as the winds.”

The worst to be expected this weekend is sleet and snow showers in the west and northwest, while generally low temperatures will bottom out at about -2 degrees at night and climb no higher than 5 degrees during the day.

By lunchtime yesterday, the remaining status red weather warning - the most severe warning - applying to counties Sligo, Mayo, Galway, Leitrim and Donegal had been reduced to orange.

At least 20 flights were diverted from Dublin Airport and 38 cancelled, as gusts of up to 53 knots (almost 100 km/h) swept across runways. Passengers were advised to check with airlines for updates, as some schedules were expected to experience knock-on effects.

Some high coastal winds had been anticipated during the storm and the Irish Coast Guard issued gale warnings for ships off all coasts. However, it said there had been no incidents over the 24-hour period, as the majority of ferries and trawlers remained in port and members of the public had heeded advice not to risk venturing out in the storm.

Many schools remained closed as a precaution yesterday and driving conditions were described as hazardous, with the risk of falling trees. Some surface water and flooding was also reported.

Co Donegal bore the brunt of the storm, with up to 12,000 homes left without power. Several outages caused hours of disruption, particularly in Glenties, Derrybeg, Creeslough and Buncrana.

Wind gust speeds of up to 150km/h ripped tiles from roofs, while several roads were closed as large trees were brought down. The vast majority of schools in the county remained closed after a directive from the Department of Education. Ferry sailings to and from Tory Island and Arranmore were cancelled, as were flights from Donegal Airport.

In Co Kerry yesterday evening, floods and ice were proving problematic, with gardaí advising motorists to avoid the Conor Pass between Tralee and Dingle in west Kerry.

Snow fell on higher ground and the council warned motorists of icy patches as well as debris left over from the storm.