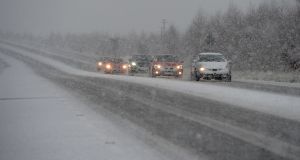 Parts of Ireland are forecast to wake up to snow on Monday, with widespread wintry showers forecast to fall overnight.

Met Éireann has issued a two-day status yellow snow and ice warning, which comes into effect at midnight with Storm Ciara set to sweep over the country.

An additional status orange wind warning for counties Donegal, Galway, Leitrim, Mayo, Sligo, Clare and Kerry will be in effect from 6am to 8pm on Monday and a status yellow wind warning is in place for the rest of the country.

Met Éireann said a combination of spring tides and high seas would create “a significant risk of coastal flooding”.

Storm Ciara is forecast to bring strong westerly winds to coastal areas on Monday with mean speeds of 65km/h to 80km/h expected as well as gusts of up to 130km/h.

Met Éireann forecaster Linda Hughes said some travel disruption should be expected as a result of the weather.

“People could be waking tomorrow morning to some snowfall lying on the ground,” she said. “There will be falls of sleet and snow, and some snow accumulations as well, mainly in the west and the north, and especially on the mountains and hills.”

Temperatures were expected to fall to freezing overnight and were not forecast to rise much higher than three degrees on Monday.

“It will be a very cold day and feeling even colder because of the strong westerly winds,” Ms Hughes added.

The Road Safety Authority (RSA) advised road users to prepare for cold weather conditions, with motorists advised to clear windows and mirrors before setting out on journeys.

In the North, the Met Office has issued a status yellow warning for snow and wind which comes into effect at midnight and runs until midnight on Tuesday.

It said heavy snow and strong winds would lead to travel disruption, especially along routes on higher ground. There was also a possibility of some vehicles and passengers on certain routes being left stranded, along with potential delays or cancellations to rail and air travel, and power cuts.

In Britain, Storm Ciara caused widespread flooding and brought winds of more than 140km/h over the weekend.

Dozens of domestic and international flights were cancelled and train companies urged passengers not to travel. Drivers faced treacherous conditions with floodwater, fallen trees and other debris closing roads.

The sporting programme was also disrupted, with horse racing, rugby union, rugby league and football fixtures, including the Premier League match between Manchester City and West Ham in Manchester, postponed on Sunday.

Storm Ciara has caused some travel disruption to flights and sailings in and out of Ireland. Aer Lingus advised travellers to check the status of their flight before departing for the airport, while Irish Ferries warned passengers there would be some disruption to sailings.

The National Parks and Wildlife Service closed a number of parks around the country on Sunday and advised the public to not visit any national monuments or nature reserves while the warning is in place. The bad weather forced the organisers of the Galway 2020 City of Culture to cancel the opening ceremony.

ESB Networks said it was working to restore power to 14,000 homes and businesses on Sunday.

Donegal County Council warned the public to be vigilant for falling trees and debris.

The Irish Coast Guard has cautioned people in coastal areas to “stay back, stay high and stay dry”.