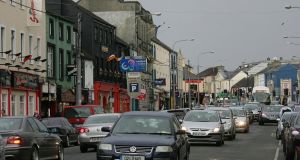 Longford vied with Drogheda, Dún Laoghaire, Dungarvan, and Kilkenny for the title of Ireland’s cleanest town following a survey of 40 towns and cities across the country in 2015. Photograph: Brenda Fitzsimons/The Irish Times.

Longford was officially named as Ireland’s cleanest town at a ceremony in Dublin on Monday.

The midlands town had been vying with Drogheda, Dungarvan, Dún Laoghaire and reigning champion Kilkenny for the prize, and eventually won out with Dún Laoghaire coming second.

Sites in Longford were said to be “not just clear of litter, but many were also “superbly presented and maintained,” according to surveyors from An Taisce.

Organising group Irish Business Against Litter (Ibal) said it will now enlist the services of a “foremost artist” to create a prominent public sculpture in the winning town to recognise its success, and all top five areas have been awarded an emperor lime tree provided by the Irish Tree Centre.

No towns were deemed to be litter blackspots last year and just one area was categorised as being seriously littered, and Ibal now counts three-quarters of areas surveyed as being clean to European norms this constitutes a drop of 15 per cent compared to 2014.

Once again, Farranree in Cork and Dublin’s north inner city propped up the rankings, with the former named as Ireland’s only seriously littered town.

Both areas registered improvements on their 2014 performances, but parts of the capital’s inner city such as Rutland Street Lower and Gardiner Street Business Park were regarded as being litter blackspots.

Conor Horgan of Ibal lamented poor levels of cleanliness in some towns, and questioned whether the 2014 consolidation of town councils into broader local authorities had contributed to the most severe general fall in standards since the competition began in 2002.

“After a decade of year-on-year improvement, it is disappointing to see the very high standards achieved by towns slip in a number of cases,” he said.

“We may be witnessing the effect of the disappearance of town councils, or we may be getting slightly complacent. At the same time, we can say the great majority of our towns are clean. Also, it is heartening to see the problem city areas getting better — if only slowly.”

He added that while the worst offenders of recent years have gotten better, this has been substantially offset by a marked disimprovement in areas which have traditionally performed well.

On a positive note, high footfall areas of Dublin city centre such as Grafton and O’Connell streets were noted as being clean, and the environs of Dublin Airport were described as “spotless”.

Recycling facilities and abandoned sites are particularly prone to littering, according to research compiled by An Taisce, and connecting routes between Dublin and Naas and Killarney and Tralee were said to be “more littered than the towns themselves”.

Whereas an ideal scenario would see 60 major centres of population surveyed every year, Mr Horgan said funding constraints means it must be limited to 40 and that this will lead to some “big players” being left out of the rankings entirely next year.

1 Number of Covid-19 patients in hospitals exceeds 2,000 for first time

Temporary system to process 4,000 Irish citizenship applications 12:33
Coombe should not have given Covid vaccines to family of staff, Donohoe says 11:57
Vaccine should not be given to people close to death, says HSE 11:27
Brexit: Currys/PC World Irish customers asked to pay import taxes in error 10:29
Defence forces deployed to three nursing homes to ease staff pressure 10:08