Extinction Rebellion held a sit-down protest outside Dáil Éireann after the Budget 2020 announcement. 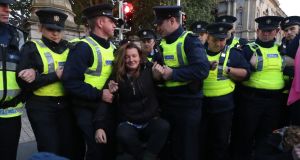 A number of Extinction Rebellion protestors who blocked the gates of Leinster House on Tuesday evening were removed by gardaí but no arrests were made.

The rally was held hours after the group presented its own budget outside the Department of Taoiseach on Merrion Street before marching down to Kildare Street, where they staged an earlier sit-down protest.

Extinction Rebellion Ireland has called on the Government to put Ireland “on a trajectory towards zero emissions by 2030” and to “fully and comprehensively” implement the recommendations of the Citizens’ Assembly and the Joint Oireachtas Committee on Climate Action.

The group’s Budget for Climate Justice asks that the Government introduce these recommendations within the framework of a “just transition” where the “most vulnerable workers and communities are protected from job losses following economic restructuring”.

Speaking outside Leinster House on Tuesday evening, protestor Claire Lyons, said they had a vote and those who decided to stay outside the Dáil gates were put on notice by the Garda that they could be arrested.

“People had gone limp, so it’s a little bit harder to move them, but they were [EACH]removed by two-four guards,” she said.

Inspector Greg Mekitarian, who was at Leinster House, said protestors were initially directed to move under the Public Order Act.

“They chose to continue with a very peaceful protest here. One or two of them were moved to allow for barriers to be put up. They conducted themselves with great dignity here today, and they were a credit to themselves,” he said.

More than 100 people gathered for an earlier rally, with activists carrying banners stating “climate breakdown: this is an emergency” and chanting “our future, our lives, our right to survive”.

A number of activists wearing animal masks carried out a short performance on Merrion Street, which included a fire breather blowing flames across a small globe. Student protester Lucy Holmes read out a poem entitled Silence.

“You’re killing your children, you cut down the trees, you’re poisoning people, you’re burning the bees. The ground that you stand on is falling from beneath your own feet. Those brown paper envelopes are far from discreet,” she said.

A minute’s silence was also observed for species that have been lost.

Patrick O’Connor, a member of Extinction Rebellion Ireland said elected leaders are “taking us down the road towards climate catastrophe and mass extinction”.

“Science tells us unless we act immediately we’re on course for extreme weather events, droughts, flooding, food shortages and rising sea levels. Despite all these warnings from the scientific community, the Irish Government shows a complete lack of recognition, of how serious the climate crisis is,” he said.

“A system based on endless economic growth and constant drive for profit at all costs is causing a crisis, threatening our very existence. We must find another way if we want life on earth to survive at all.”

Susan Breen, also a member of the movement, said “unless we act now, the consequences will be catastrophic”.

“Our survival and success must not be bought at the expense of other people, either in Ireland or other countries. We must create a world where no one is left behind as we advance to a re-generative and sustainable way of life,” she said.