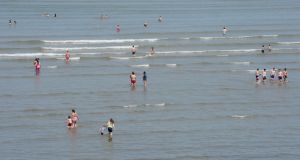 Paddlers and swimmers take to the water at Seapoint in Dublin during the fine weather. Photograph: Alan Betson

Gardaí were forced to disperse crowds at a number of beauty spots over the weekend as large numbers gathered in coastal areas to enjoyed the sunshine.

At the Forty Foot swimming location in south Dublin, gardaí moved on large groups of people who were not social distancing.

Across the bay, gardaí closed the Bull Wall bridge to cars to stem the numbers gathering on Dollymount beach. It will remain closed to cars until Tuesday.

Beaches in Cork, Kerry, Donegal and Louth were also closed due to the size of crowds gathering there.

Parks, beaches and beauty spots were the focus for gardaí enforcing the coronavirus restrictions over the weekend. A reduction of overtime has meant a decrease in the number of road checkpoints in operation.

There were some incidents of public order reported, including at Salthill in Galway where, according to gardaí, 40 youths attempted to prevent the arrest of a male at about 7pm on Saturday.

Several Garda units were deployed to the scene and two people were arrested.

“They have since been released and a file will be prepared for the Director of Public Prosecutions in relation to this matter,” a Garda spokesperson said.

As the warm weather continues, Irish Water has appealed to members of the public to conserve water where they can and says it is “exploring all options”, including a potential hosepipe ban, to protect water supplies.

Some 15 of the national water utility’s 900 drinking water schemes have hit “drought status” with another 23 at risk of going into drought, Irish Water said on Sunday.

It warned that the increased domestic demand for water, combined with a rise in commercial demand as businesses reopen, was being exacerbated by warm weather and the growth of drought conditions.

Irish Water reiterated its appeal for people to hand-wash kitchen items rather than using power washers and also urged members of the public to use a watering can rather than a hose, to take a shower rather than a bath and to fix any dripping taps.

Temperatures on Sunday had peaked at 25 degrees Celsius in Co Roscommon by 2pm with the warm weather expected to rise further to 26 degrees in certain parts of the country by the end of the day.

A high of 26.8 degrees was recorded in Mount Dillon, Co Roscommon, on Saturday, equalling the highest temperature for the year. Almost everywhere on Saturday had temperatures well into the 20s as a ridge of pressure remained over Ireland.

The warm bank-holiday weather also brought a heightened risk of forest fires with a red fire warning in place around the country until Monday evening.

The Department of Agriculture, Food and the Marine issued the warning on Friday, saying there was an “extreme fire risk” and called on the public to take “immediate action” if a blaze breaks out.

Firefighters continued to tackle blazes in counties Sligo, Clare, Laois and Leitrim on Sunday but successfully brought a large fire which quickly spread on Saturday in Co Kildare under control.

More than 100 hectares of newly-planted forest were destroyed in the blaze in Clonagh, Enfield, on the Kildare-Meath border, with damage worth €150,000 to the area, said Pat Neville, Coillte communications manager.

Coillte helicopters, the Irish Air Corps and units from Kildare County Council worked together on Saturday to keep the fire at the forest in Hortland away from a factory which produces explosives for mining and quarrying.

Mr Neville confirmed that the fire was now under control but that blazes were continuing to spread in other parts of the country. He urged members of the public not to do any burning outdoors and to immediately report any blazes to the fire services.

A status red forest fire warning is “very unusual” for this country but given the dry conditions, measures are needed to prevent the spread of further fires, said Mr Neville.

“The conditions for fire are perfect right now – it’s dry, there’s no rain and there’s a breeze that fans the fire. Even a small fire can take hold very quickly, it can really get out of control and cause extreme risk to the public and a real health and safety risk for firefighters.