Free public transport – could it work for Dublin?

Dunkirk is latest European city to offer a free-fare system. Could we follow suit? 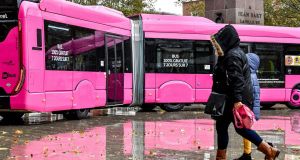 The first fare-free public transport system was set up in a suburb of Los Angeles in 1962. Bologna experimented with free transport in the 1970s, when it was ruled by the Communist party.

By 2000, there were 27 free public systems in the world. That increased to 60 in 2010, 99 in 2017 and 114 today, the majority in Europe, says Wojciech Keblowski, an expert on free public transport at the Free University Brussels.

So does this mean free public transport is the wave of the future? The answer depends on the size and sociology of the city, and the existing network. Free transport has been a resounding success in, among others, Tallinn, Estonia, and Dunkirk, northern France.

After studying Dunkirk’s example, Paris decided on January 10th to expand its tiered fare system, rather than abolish fares altogether.

Contrary to what one might think, the main benefits of free public transport are sociological, not environmental

James Wickham, a retired professor in sociology at Trinity College Dublin and author of Gridlock: Dublin’s Transport Crisis and the Future of the City, says the question is largely irrelevant to the Irish capital.

“It is very clear that the success or failure of a system depends highly on context,” says Keblowski.

“The way it is done, the reasons why it is done. The absolute key thing is that there be strong political will behind it.”

Paris mayor Anne Hidalgo raised the possibility of a full free-fare public system last March, when she was under fire for bungling changes to the city’s Vélib bicycle system. Hidalgo’s deputies spent nine months drawing up a report that concluded free transport would not work for the French capital.

Paris could not accommodate a projected increase in public transport use, from 36 per cent to 48 per cent of all journeys, if the already saturated system was offered free of charge, the report said. Car traffic would have decreased only marginally, simulations showed.

Public transport in Paris and the surrounding Ile-de-France region costs €10.1 billion annually. An exceptionally high percentage, 27.1 per cent, is financed by fares. In Dunkirk, which went fare-free last September, only 10 per cent of costs were paid by users.

Discord between Hidalgo, a Socialist, and Valérie Pécresse, the conservative president of the Ile-de-France region surrounding Paris, also worked against a free-fare system. Pécresse’s constituency relies heavily on cars. Hidalgo has infuriated motorists by eliminating parking spaces, closing the banks of the Seine to traffic and other measures intended to discourage car use.

Hidalgo instead adopted 23 measures which will cost the city €5 million annually. The most publicised will provide free transport for children under the age of 11.

To create a free system, Paris would have had to spend a great deal more on public transport, and much less on car infrastructure, says Keblowski. “Maintaining fares is a way of keeping the system stable, of not radically changing priorities for transport infrastructure.”

Contrary to what one might think, the main benefits of free public transport are sociological, not environmental.

Helping the underprivileged is the most powerful argument in its favour. “Use among vulnerable groups – the unemployed, the elderly and youths who do not have a middle-class income – increases dramatically when fares are abolished,” Keblowski says.

“The city becomes much more available to them. They can look for jobs and take advantage of cultural activities and institutions. That argument is especially present in the French context.”

In Aubagne, a suburb of Marseille where Keblowski conducted research, “there is a clear danger of ghettoisation, of locking people in neighbourhoods from which it is difficult to escape. In such cities, free public transport is a social policy that redistributes access to the city . . . The challenge is to be socially sensitive to the effect of policies, so we don’t end up with cities that are green and environmentally friendly, but essentially middle-class enclaves surrounded by the working class living in car-oriented suburbs.”

Patrice Vergriete, the mayor of Dunkirk, previously ran an urban planning agency. In his 2014 campaign, he promised to make all bus lines free in the city of 200,000.

“Dunkirk was razed in the second World War. You probably saw the movie,” Vergriete says. “It was rebuilt for cars, which were used by the vast majority of people. It had become an environmental problem, not only for air quality. A quarter of the city centre was parking lots, which meant less space for housing.”

Vergriete, a former Socialist, wanted to increase the purchasing power of Dunkirk’s citizens. “City taxes are mainly property taxes, so if you lower them, the property owners benefit. Making the bus free was a way of lowering tax for the elderly, for youths and the disadvantaged. It enabled everyone to move around the city freely, which fights social exclusion and the isolation of the elderly. We have far fewer shut-ins.”

Finally, Vergriete says, he wanted to create a “psychological shock” that would push people towards the bus system. “If you don’t do that, people won’t change their habits and they keep their cars. Free public transport was a shock. Five months later, people are still talking about it in Dunkirk.”

Public transport is a fundamental right, like health and education. The Anglo-Saxons have a liberal vision, which says users should pay for the system

Vergriete knew it was important to improve the quality of the system before making it free. He expanded the bus fleet from 100 to 140 and banned parking downtown. He had city buses painted bright pink, orange, green, yellow and blue, with matching seats. Some run on environmentally friendly natural gas.

“We want people to see them. We are proud of them,” he says. Buses pass every 10 minutes. Some provide free wifi and entertainment.

“We want to make buses a place of conviviality,” the mayor continues. “People used to talk to each other in cafes. The buses have become like cafes in the old days, the place where people meet and talk to each other.”

Bus usage has increased by 50 to 85 per cent. Vergriete disputes studies that claim free transport draws more pedestrians and cyclists than motorists. Fewer than 1 per cent of journeys in Dunkirk were made by bicycle.

Though statistics will not be available until June, Vergriete expects them to show a high percentage of motorists have switched to buses, and substantially increased mobility among Dunkirk’s citizens.

To finance free transport, Dunkirk has increased its transport budget by €15 million, to €35 million. That is 55 per cent financed by the versement transport charged of all businesses employing more than 11 people, and 45 per cent by the city itself.

Ireland, the United Kingdom and United States have a different attitude towards public transport, Vergriete notes. “Public transport is a fundamental right, like health and education. The Anglo-Saxons have a liberal vision, which says users should pay for the system. I have no problem with the user not paying. If a person is mobile, pollutes less, does not take up parking space and has greater purchasing power, surely that is for the common good?”

Wickham, the retired sociology professor from TCD, agrees with Vergriete. “In many ways, Ireland is more Anglo-Saxon than the British,” he says. “We don’t have a national health service . . . Transport is a public service. You have to subsidise it.”

For example, a bus that went around the North Circular and down the South Circular, would be dead cheap. Make that one free

Wickham has piles of documents on the shelves of his study, going back 20 years. “They show all sorts of lovely lines on maps for metros and Luas extensions, virtually none of which has happened.”

It goes back to Keblowski’s point about strong political will. “We have a ceremonial mayor for Dublin city,” Wickham says. “If you want proper public transport in a city, a powerful political authority is an essential condition.”

The National Transport Authority has a legal duty to “consider” strategy for Dublin, Wickham notes. “But it has no responsibility to any elected body in Dublin. Most big, successful cities have something that looks like a transport authority, whose experts answer to a mayor or an assembly.”

Dublin’s transport needs are so great, the city so sprawled, that priority must be given to “tying bits of the city together”, Wickham says.

“We have what academics call constrained car dependency, which means you cannot move around unless you have a car, so you have to buy a car.”

All the bus routes into the city are radial, Wickham says. “But studies show most journeys are from one suburb to another. You need some orbital routes, for example, a bus that went around the North Circular and down the South Circular, would be dead cheap. Make that one free. That would be absolutely brilliant.”

Ireland already provides free public transport for citizens aged 66 and older, and for certain categories of welfare recipients. Free transport is irrelevant for greater Dublin, Wickham argues, but he makes an exception for the city centre, “between the canals . . . It would be largely used by tourists, and would prevent them clogging up at the Book of Kells and Dublin Castle.

“Free public transport financed explicitly by a tourist tax on Airbnb’s and hotels within the canals makes sense.”