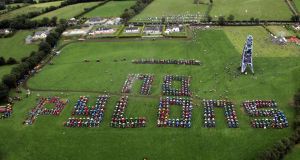 The “character of the landscape” and the “cultural heritage” of parts of the country close to proposed electrical pylons could be at risk, Fáilte Ireland has said.

Responding to a parliamentary question tabled by Deputy Dara Calleary (FF), the national tourism development authority said it had met with electricity transmission operator Eirgrid to discuss the proposed schemes and outline its “objectives to protect the key tourism assets and amenities within the vicinity of these schemes”.

As part of a €3.2 billion, Grid 25 project, Eirgrid is proposing to build three new 400kV power lines across the south and north east of the country.

The North South Interconnector is to link Co Meath with Co Tyrone while a second line would link Co Kildare to Co Cork via Co Wexford. A third power line would link Co Mayo to Co Roscommon. Eirgrid has said the power lines are necessary to develop and upgrade Ireland’s electricity transmission grid.

The plans have attracted much controversy with environmental and farmers groups calling for the power lines to be developed underground.

In its response to Mr Calleary, Fáilte Ireland said it was working on a number of the schemes around the country to ensure “that key tourism assets and amenities are identified and considered appropriately within the planning process”.

“It is considered that the character of the landscape and the various aspects of the cultural heritage of the area within the vicinity of the proposed schemes are the main tourism amenities that could potentially be at risk,” the authority said.

Speaking to The Irish Times, a spokesman for the authority said the response to Mr Calleary “sets out the organisation’s remit and the areas we would be looking at in any development”.

“But we haven’t pointed to or raised any specific concerns,” he said.

“We are still examining the issues.”

He also said the authority would be making a formal submission on the schemes proposed by the first week in January.

Mr Calleary said Fáilte Ireland’s “concerns” further highlighted the need for proper and thorough consultation with communities and interest groups. He said the authority “had emphasised the need to consider alternative means of electricity transmission in certain areas, where the landscape and tourism of that area may be significantly damaged by overhead pylons”.

“While the need to upgrade our electricity transmission system is clear and is supported by Fianna Fail, it must be done in a way that does not undermine other key strategic national assets. In our view Eirgrid must consider sustainable alternatives to overhead pylons in areas with high tourism potential,” he said.