Even paradise needs a gardener

Hard labour in paradise can be fun on holiday 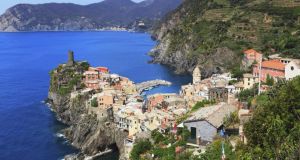 In 2011 a violent rain storm caused landslips that buried the main street and piazza of Vernazza (above) and killed three people. Photograph: IStockphoto

Lugging buckets of soil and rocks up a steep, unstable slope, early on a damp morning, or weeding an olive grove in the midday Mediterranean sun, probably do not figure high on most people’s favourite holiday plans.

Yet the unanimous verdict among young backpackers, after carrying out these tasks for the Save Vernazza project last month, was that they had spent few happier hours in three months’ travel around Europe with Busabout.

This travel agency usually recommends guided city visits and rural hikes to its clients. The exquisitely picturesque village of Vernazza, in Italy’s Cinque Terre region, on the Ligurian Riviera south of Genoa, is one of its most popular destinations.

The Cinque Terre combines the gastronomic delights of five romantic villages with opportunities for spectacular hikes through the dramatically terraced vineyards and olive groves on the vertiginous hillsides above them.

The wildflowers at this time of year are breathtaking. Great masses of broom and vetch splash the green macchia vegetation with yellow and blue, studded with the brilliant red of thousands of poppies.

Canary-like serins and assorted warblers chorus with blackbirds through the day; frogs and toads serenade the nights; rare salamanders can be found in old drinking troughs.

So Vernazza can easily seem like paradise for the eco-tourist, especially for those who like their outdoor exertions to be rewarded with a glass of local wine and fresh seafood in the evening.

This paradise suddenly turned into hell, however, on October 25th, 2011. An unprecedentedly violent rain storm caused landslips that buried the main street and piazza of Vernazza under four metres of mud and rocks, and killed three of its citizens.

The Cinque Terre is both a Unesco World Heritage Site and a National Park, so funds flowed in quite quickly to restore the village itself. On the face of it, the clean-up has been remarkably successful, with most shops and restaurants now resurrected from the debris.

However, the few small farmers who still maintain the terraced agriculture that gives the region its distinctive character are finding it much harder to find financial support to repair the widespread damage to their properties.

And big questions remain about the instability of the slopes, exacerbated by the slow collapse of the many terraces abandoned over the last century, and about whether enough is being done to prevent another disaster.

Continuing sharp increases in monthly rainfall have already precipitated a series of further, though smaller, landslips.

Yet the National Park administration remains in disarray after its first president was charged with misuse of public funds three years ago. Its ambitious plans for widespread restoration of abandoned terraces appear to be on hold, though some progress is being made in the previously neglected area of scientific research.

After the October crisis, three American women with long and deep ties to the village launched a volunteer initiative, Save Vernazza, which aims to “transform a devastating natural disaster into an opportunity to create and implement a common vision for a sustainable future”. It has already accomplished some significant work in the village itself, including the restoration of a chapel and a bridge. And Pritzker Prize-winning architect Richard Rogers has donated the design for a bold project to redesign Vernazza’s public spaces.

This year, the initiative also went into partnership with Busabout to create volunteer opportunities on the wounded landscape overlooking its streets.

So I set off early one morning, with Michele Lilley of Save Vernazza, and two Australian backpackers, Nicole and Manda, to help Nadia Roccatagliata weed her olive grove. As well as benefiting the trees, the weeding cleared the way for rebuilding the three stone walls that had collapsed on the farm during the floods.

I was a little sceptical, at first, about the willingness of my companions to get their hands dirty. Neither of them would have looked entirely out of place on a fashion shoot at the start of the day.

My prejudice was shamefully misplaced. They both mucked in with a will, and within a couple of hours Nadia pronounced herself delighted with her “clean and tidy” olive grove. In the meantime, she had taught us to eat the flowers of wild borage as we pulled it up and explained that its leaves are used to colour and flavour green pasta.

A sumptuous rustic lunch followed, including bruschetta made with oil from the trees we were sitting under. As we ate, Nadia talked about how her tiny stone farmhouse had sheltered antifascist partisans during the second World War, which was really a civil war in this part of Italy.

She took out an photograph of her father and his comrades in partisan uniform. “These men wanted to change Italy . . .” she said, and then added wryly: “. . . and we are still waiting.” Heritage is complex here. It’s not just bricks and mortar, and traditional agriculture; it’s history and politics also.

Our next work detail was a lot tougher, digging out fallen walls on Massimo and Angelo Evangelisti’s vineyard, although we were rewarded with glorious views.

This time there were eight backpackers on the job, and again they displayed good-humoured vigour in hauling soil and rocks uphill, while Massimo did the skilled work of repairing a drystone wall.

“This kind of help is of real practical importance to us,” Massimo said. “But I also like the way it helps tourists understand the reality of our landscape in a direct, participative way, instead of just gawking at it and saying” – he mimics wickedly in English – “ ‘Nice, nice, nice.’ ”

If you happen to holiday in the Cinque Terre, as many Irish people do, you might be surprised at how much you could enjoy this kind of engagement with the scenery. It certainly teaches you that, as the Save Vernazza T-shirt puts it, “Even Paradise Needs a Gardener”.

Paddy Woodworth’s forthcoming book for University of Chicago Press, Our Once and Future Planet: Restoring the World in the Climate Change Century, has a chapter on restoring the cultural landscape of the Cinque Terre.