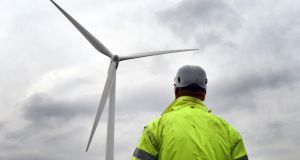 Ireland has the potential to export wind energy as other countries struggle to meet renewable energy targets. Photograph: David Sleator

Ireland is touted as the European Saudi Arabia of wind with its wild Atlantic coast and large tracts of rural land. It also has the potential to export wind energy as other countries struggle to meet renewable energy targets. Two firms have plans for a mammoth infrastructural project in the midlands.

Element Power and Mainstream Renewable Power are vying for the opportunity to place 2,450 wind turbines in Ireland to export power to the UK. The project would be split between on and offshore developments, with 1,150 turbines across six counties in the midlands – Offaly, Tipperary, Laois, Kildare, Meath and Westmeath – and a further 1,300 turbines could be placed in the Irish Sea by Mainstream.

There has been growing opposition to wind farm developments in the UK, leading the government there to locate more offshore. This is where Ireland comes in as, despite the added billions to place power cables under the Irish Sea, it will be cheaper for the UK to import energy via these cables from Ireland than place turbines offshore. A memorandum of understanding signed by the Irish and British governments in January could save UK consumers up to £7 billion in energy costs.

The two main benefits of the projects for the State are the creation of new jobs and economic gain through taxes and land rental. However it’s difficult to put a figure on the real benefit for the Irish economy.

The Economic and Social Research Institute’s Prof John FitzGerald says, “There’s a bit of mixing up going on which makes it difficult to track down what the true benefit to Ireland is. The bulk of the benefit will be to the landowners . . . and shareholders. The benefits to the wider public come as jobs, long-term and short-term and as people spend the money, which generates more activity.”


Jobs incentive
Industry representatives at the Irish Wind Energy Association estimate 2,200 people are employed by the 159 wind farms in the Republic of Ireland – an average of 14 jobs per wind farm. The need for more work in the midlands has been cited as an incentive to place the farms in that area.

Element Power is leading the “Greenwire” project to place 750 wind turbines in the midlands, creating 3,000 megawatts of power for export. The company is a subsidiary of US private equity company Hudson Clean Energy Partners and was set up in 2008.

Element Power’s Irish chief executive Tim Cowhig headed up SWS Energy, a wind power company sold to Bord Gáis in 2009. More recently, he was seen as a rising star of Fine Gael in southwest Cork, though he continued in the energy business when he failed to get a 2011 general election nomination.

In the past, Element Power said its midlands project would create 10,000 jobs in the construction phase, with a further 3,000 medium-term jobs. At a closer look, the number of direct Irish jobs is quite different, as the headline figures depend on developing the supply chain and setting up a new industry in Ireland. The jobs could also be split between Ireland and the UK, with two-thirds in Ireland.

Element Power chief technology officer Peter Harte says in terms of direct Irish jobs there would be 6,000 from the Greenwire project in the construction phase and 1,200 medium-term maintenance jobs – almost 50 per cent fewer than announced.

He explains, “We said ‘look Ireland isn’t manufacturing turbines and frankly we’re not going to become an overnight leading turbine manufacturer’. But we do think there’s room for certain components . . . so we said even of the 13 jobs that are to do with the manufacturing and supply chain, if only one of those came to Ireland, well that would be another one job per MW, meaning another 3,000 jobs. So we said look, round numbers, let’s call it 10,000.

“To close the circle we said not all of that manufacturing is going to go away after Greenwire is built. Maybe half of the jobs would stay so when you take the 1,500 supply chain that might stay . . . plus the 1,200 direct jobs, you get about 3,000 long term jobs."


Building and maintenance
Prof FitzGerald says there will be jobs building and maintaining them, “but it’s not huge. What they were talking about, but they have de-emphasised correctly I think, is that Ireland could end up building all these windmills.

“Ireland isn’t big on mechanical engineering – it could be jobs in China, it could mean jobs in Germany, but we don’t do mechanical engineering. Insofar as there would be jobs it would be in IT software, control systems that we might develop. There’d be jobs in maintaining it, a smaller number of jobs which still no one will sneer at but jobs in building the things are much less likely.”

The true economic benefit to the State has also yet to be nailed down. It’s expected the project could be worth €1.2 billion in exports each year, though much of that money would go to the private equity company rather than the State.

Revenue would receive taxes on that figure, expected to be split between the UK and Ireland. There are also projected payments of €50 million to private and government landowners each year as well as benefits from taxation on wages, project expenditure and the opportunity to lay other cables when the project is under construction.

Dublin-based Mainstream Renewable Power was founded in 2008 and is run by former Bord na Móna chief executive Eddie O’Connor. It also has plans to export energy to the UK with its “Energy Bridge” project. The project would involve 1,700 wind turbines, with 400 of those in the midlands and the other 1,300 in the Irish Sea, generating 1,200MW and 3,800MW of power respectively. The jobs figures for Mainstream also include the expectation the supply chain will be developed in Ireland. On closer inspection, 500 medium-term jobs will be created in the maintenance and operation of the wind farms that will be built by Mainstream – 20 times less than the headline figure of 40,000 overall reported jobs.

Mr O’Connor says, “I’m the author of the 40,000 jobs figures and here’s where it came from . . . if we embrace the Energy Bridge and get the supply chain lined up, the turbine, blades, gearbox manufacturers and the companies who are going to build the roads lined up and we get that supply chain going in Ireland as they have in Germany, we’ll have eight jobs for every MW installed. That’s where the 40,000 jobs came from. I’m just lumping everything and saying there will be a huge number of people employed in five years of the Energy Bridge if the Government gets its act together . . .”


Complex figures
When it comes to direct employment in the construction of the Energy Bridge, the figures are complex. Mr O'Connor says, “That should be the simplest number I should be able to give you but I don’t know what it is. I’d say it’s around 10,000 . . . I think it’s probably going to be about 2,000 people employed for five or six years.”

The economic benefit from the expected export value and revenues created by taxes has yet to be added up. In addition to this, Mainstream expects an €18.4 million benefit in its midlands project to landowners, councils and community groups each year. When accounting for the total project, including development of 1,300 turbines in the Irish Sea, it expects that figure to rise to €78.2 million, as well as creating value through infrastructure.

Scrutiny of reported jobs figures is raising questions about the development for community groups. Lakeland Windfarm Information Group representative Andrew Duncan says: “They have sold the project on jobs because they are trying to justify the imposition of it in Ireland on the basis that there will be benefits in jobs that outweigh the damage that they are doing. The problem is that the benefits are not accurate and they’re disproportionate to the negative impacts. Also you have to bear in mind those jobs will be mostly short-term. The jobs are not there. They’re hoping that ancillary jobs will work out around these but I don’t believe it.”

One of the other areas yet to be clarified is which country will pay the market support, or subsidies, to the businesses building the wind farms.

“It must be absolutely clear that market support must be paid by the British consumer and taxpayer not the Irish. It would be totally inappropriate to subsidise exports when the proposal is to not directly connect into the Irish grid,” Mr FitzGerald says. “If properly regulated, it would be a benefit for Ireland as well as the developers. . . as long as the Irish taxpayer or consumer doesn’t carry the risk.”


UK royalties
Another area which should be open to discussion, says Mr FitzGerald is royalty payments to the Government.

“It looks as if, given the alternative to the British, they will save a significant amount of money in the project. The people of Ireland should probably get a cut of that in terms of a royalty but you don’t want to kill the golden goose, so they'll have to work that out.”