ESB plan to demolish HQ appealed to An Bord Pleanála

Five parties, including An Taisce, have appealed council decision to approve development 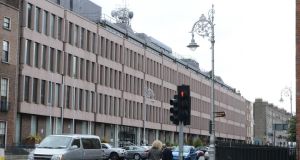 ESB’s plans to demolish and redevelop its 1960s Fitzwilliam Street headquarters at a cost of about €150 million have been appealed to An Bord Pleanála.

Dublin City Council last month granted approval for the scheme to knock down the building designed by architects Sam Stephenson and Arthur Gibney and replace it with a development doubling the capacity of the existing offices.

Five parties, including An Taisce, have appealed against the council’s decision to approve the development. The ESB has also appealed to the planning board against conditions imposed by the council which would have reduced the height of the new buildings.

In 2013 the ESB announced its intention to build new offices on Fitzwilliam Street, but the proposal did not comply with the Dublin city development plan. This required the Georgian facades of the 16 buildings, demolished to make way for the headquarters almost 50 years ago, to be reinstated.

City councillors voted last March to change the development plan, removing the reference to facade reinstatement, and including a provision that any redevelopment “respects and enhances the character and composition of the Georgian streetscape”.

In its objection, An Taisce said the development, designed by Grafton Architects and O’Mahony Pike, failed to achieve this and was in parts “a frivolous and poorly informed response to an important and highly sensitive setting”.

In the plans lodged by the company, parts of the development would have been seven storeys high, far taller than the surrounding Georgian houses.

The Department of Arts and Heritage had raised concerns with the council in relation to the height of the development and said the three seven-storey blocks should be reduced to five storeys and the other blocks reduced proportionately.

In response, the height of two blocks was reduced by one floor, and floors linking some blocks were removed as part of the council’s conditions in granting planning permission.

In its appeal the ESB said it appreciated the council’s changes to its scheme arose from a “genuine and understandable desire to protect the visual amenity” of the Georgian city. But it said the scheme was more than the sum of its parts and the council’s decision jeopardised “the very matters it is intended to protect”.