Council to launch ‘blitz’ on dumpers in New Year 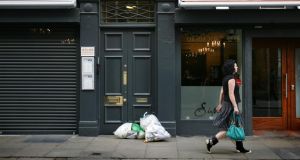 Householders will be asked to prove they are disposing of their waste in an “authorised manner” either by using a waste collection firm or taking their waste to a regulated facility. Photograph: Kate Geraghty.

Dublin’s most persistent illegal dumpers can expect a visit from city council officials, litter wardens and gardaí in the New Year. The council is planning a “blitz” on what it says are the dumping black spots in the city, where residents leave their rubbish in the streets instead of paying for waste collection.

Householders will be asked to prove they are disposing of their waste in an “authorised manner” either by using a waste collection firm or taking their waste to a regulated facility. Those who cannot will face legal action, said the council.

“Streets and properties have been identified where constant littering and illegal dumping is taking place on a daily basis. It is planned to target these streets as part of our ‘blitz’ in the central area in January 2014,” senior executive officer Brendan Hayden said.

Earlier this year the council proposed to suspend street cleaning in certain parts of the city because of the “unrelenting issue” of dumping, but dropped the plan under pressure from councillors who said it would be unfair to residents who disposed of their waste legally.

‘Approved collector’
The council subsequently passed bylaws requiring householders to have their waste collected by “an approved collector” or disposed of at a proper waste facility and giving the council powers to call to homes and demand evidence of how waste was being removed.

“Central area staff with authorised persons, appointed under the litter bylaws, along with litter wardens . . . will be calling to all houses in black spot areas with a questionnaire to establish how the households are disposing of their waste,” Mr Hayden said.

“Community gardaí have been asked to assist and accompany staff in an effort to ensure there will be no aggressive behaviour and to ask the house holders to identify themselves if they fail to co-operate with Dublin City Council staff.”

Residents will be asked to produce receipts or other documentation which proves they are properly disposing of their waste.

“Households who fail to satisfy Dublin City Council staff that they have an arrangement in place to dispose of household waste in a proper and authorised manner will be issued with a warning letter which will detail what the householder needs to put in place in order to bring them in line with the new litter bylaws,” he said.

Warning letters
Follow-up calls will be made to each household issued with warning letters to ensure that they have complied with the warning.

“If no satisfactory evidence is produced by the householder, relevant details will be passed on to the appointed person and court proceedings will be initiated against that person.”

Details of the streets and areas that will be targeted will not be released until inspections are carried out, said Mr Hayden. But the council had previously identified an area from Gardiner Street to Croke Park as the zone where street cleaning would be withheld, before that plan was scrapped.