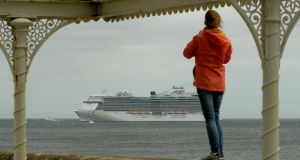 The Royal Princess Cruise Ship off the Dún Laoghaire coastline in 2015.

Plans to bring cruise liners to Dún Laoghaire harbour are to go back to the drawing board after An Bord Pleanála decided not to defend a judicial review of its decision to grant permission for the development.

Environmental group Save-Our-Seafront, chaired by Solidarity TD Richard Boyd Barrett, was last January given leave by the High Court to challenge the planning board’s decision to approve cruise ships docking at the harbour.

It also argued the proposed development would lead to the dumping of toxic sludge in Dublin Bay and neighbouring Special Areas of Conservation and that the cruise ships would discharge waste directly into the Bay.

Dún Laoghaire Harbour Company (DLHC) was last November granted permission for the €18 million redevelopment of the port, which would have allowed ships of up to 250m in length dock in the south Dublin town.

In a statement the harbour company said it had been informed that “An Bord Pleanála will not be defending a judicial review” of the planning decision.

The company said the board had determined that “certain technical requirements of the Habitats Directive necessitate additional information to be supplied by DLHC” and had recommended the company send its planning application back to the board for further assessment.

“DLHC will co-operate fully with such a request by An Bord Pleanála,” the statement said.

Company chief executive Gerry Dunne said that while the nature of the issues involved had yet to be outlined in detail he believed them to be “technical and not substantive”.

Mr Boyd Barrett said the outcome was a “crucial victory for the future of Dublin Bay and Dún Laoghaire Harbour” which he hoped would now be developed as a public amenity.

“Hopefully this victory will finally convince the Harbour Company about the unsuitability of bringing enormous cruise ships into the harbour or promoting inappropriate developments that would destroy it as a public amenity and a precious piece of our marine heritage.”

An Bord Pleanála did not respond to queries.

The case will return to the Commercial Court after Easter for the Court to make final orders.