UN climate talks break up with no agreement on carbon markets 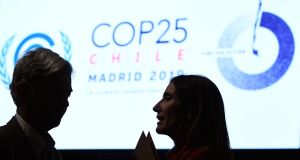 After two weeks of talks, envoys from almost 200 countries shelved work on adding market mechanisms as a tool to curb greenhouse gases, settling on a more limited set of measures to rein in climate change.

Delegates at a United Nations meeting in Madrid deadlocked for a second year in a row on how to create a system of credits for projects that would cut emissions. They also couldn’t agree on language about how to spur finance for green projects.

The result left open how key sections of the landmark 2015 Paris Agreement will work when that deal comes into force next year. Many envoys said that the decision to express an “urgent need” to make more ambitious cuts in fossil fuel emissions represents a step backward from previous deals.

“It’s not what the world had hoped for and what Europe would’ve hoped for,” said Karsten Sach, an official speaking for Germany at the meeting in Madrid. “We couldn’t agree on a market mechanism. The process was sometimes a little bit cumbersome and slow.”

The delegates from environment and energy ministries stumbled over the details for a new market instrument to rein in pollution. They were trying to work out how to prevent double counting of credits and integrate into the new system an existing mechanism that funnels at least $138 billion into green projects.

The impasse leaves companies that encouraged carbon trading, including the oil major Royal Dutch Shell Plc and the Spanish utility Iberdrola SA, with fewer price signals showing how quickly the cost of pollution is rising.

“This is a huge disappointment,” said Dirk Forrister, chief executive officer of the International Emissions Trading Association. “The fact is that countries’ ability to deliver stronger targets in line with net zero goals will depend on having access to international market cooperation.”

The meeting was meant to flesh out the last rules needed to implement the 2015 Paris Agreement, under which all nations promised steps to cut greenhouse gas pollution.

The delegates are working toward limiting the Earth’s average temperature increase to 1.5 degrees Celsius since the start of the industrial revolution. Even that would be the biggest shift in the climate since the last ice age ended some 10,000 years ago, and scientists say rising temperatures are already lifting sea levels and causing more violent storms.

“The key polluting countries responsible for 80 per cent of the world’s climate-wrecking emissions stood mute while smaller countries announced they’ll work to drive down harmful emissions in the coming year,” said Jake Schmidt, who is following the talks for the Natural Resources Defense Council, a New York-based research group.

While carbon markets were the main strand of discussion this year in Madrid, the most visible disagreement at the talks was over what the delegates call “ambition.” That relates to the voluntary commitments nations make toward cutting emissions.

The language adopted this year was so weak that for many envoys it marked a step backward from the Paris Agreement, under which nations agreed to offer deeper reductions every few years. The reversal, aided by President Donald Trump’s decision to back away from reductions the US had pledged in previous years, undermined the integrity of the talks.

“There is no sugarcoating it: the negotiations fell far short of what was expected,” said Helen Mountford, vice president for climate and economics at the World Resources Institute, a US research group. “Instead of leading the charge for more ambition, most of the large emitters were missing in action or obstructive.”

From Egypt to Uruguay, Saudi Arabia and Malaysia, nations expressed concern there was no language in the decision about how to spur climate-related aid.

That backtracks on a principle of the 1992 convention that set up the talks: that rich countries have the biggest historical responsibility for emissions and should pay to help the poor to fix the problem. Since 2009, industrial nations have been promising to boost climate aid to $100 billion a year by 2020. Uncertainty about how that money will flow eroded the willingness of countries to compromise on their demands.

Envoys aimed to elaborate on Article 6 of the Paris deal. That section of the 27-page accord allowed market mechanisms to be used in meeting emissions goals, though it didn’t spell out how those would work.

The ambition was to revive the Clean Development Mechanism and other tools that channeled aid to poorer nations for projects that cut emissions. Those projects generated tradable securities representing emissions cuts.

To some extent, the consequences of failure this year are low. Markets were the main agenda item, and many nations and green groups were sceptical about involving those mechanisms. They see carbon trading as a distraction from the broader need for much deeper and faster cuts in emissions, which no market mechanism would force.

“It symbolises profits for their private sector and the chance to give the appearance that they are meeting their commitments while continuing to pollute and operate business as usual,” said Tina Stege, the climate envoy for the Marshall Islands.

Failure in Madrid puts a spotlight on the UK, which is hosting next year’s talks in Glasgow. The agenda there was focused on raising the ambitions of countries to promise deeper cuts than they have set out for the Paris deal. Markets will now complicate that discussion.

“We firmly believe market mechanisms are a crucial element of the Paris Agreement architecture,” said Leonardo Cleaver de Athayde, director of the environmental department at Brazil’s foreign ministry. “We find it very frustrating that at the end of the day we were not able to arrive at a final agreement.”

The envoys agreed to use texts drawn up in the closing hours of the Madrid meeting as the basis of their discussions next year, saying much progress had been made.

“For Glasgow to be a success, we need a clear message that countries will be called to revise and improve their climate action plans,” said Mohamed Adow, director of Power Shift Africa, an environmental group. “If that doesn’t come through, there’s going to be little that we can be able to harvest in Glasgow.” – Bloomberg