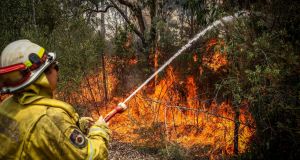 Prof Alston said Australia had awarded contracts worth billions to extract coal but parts of the country were ‘burning furiously’ due to bushfires. File photograph: David Gray/Bloomberg

The prospect of limiting a rise in global temperatures to 1.5 degrees – a key target of the Paris climate change agreement – “is now almost comprehensively lost unless there is a revolution across the world”, a UN official has said.

Prof Philip Alston, special rapporteur on extreme poverty and human rights, said governments, including Ireland’s, were declaring climate emergencies but the problem was “nobody is listening” to what the science was indicating and responding accordingly.

“We will be extremely lucky if we get close to a rise of 2 degrees and the prospects are rising every day that we will be up 3 to 4 degrees,” he told a seminar in Dublin on Thursday.

Prof Alston said despite the extent of the crisis, “we are doing dramatically and stunningly little” to cut carbon emissions “and that includes Ireland, I’m sorry to say”.

Greenhouse gas emissions had doubled since 1990, while current government plans for fossil fuel expansion would see a 50 per cent increase globally in production between now and 2030.

He said Australia, where he is from, had awarded contracts worth billions to extract coal, but parts of the country are “burning furiously” due to bushfires breaking out and spreading amid high temperatures.

He said Poland, headed by a climate-sceptic government, refused last week to sign up to Europe’s green new deal. This coincided with him being at a human rights congress, where Polish delegates were casually wondering why the snow was a month late.

“There was no real preparedness to put two and two together.”

He said it may surprise some but Brussels was the only place where progressive steps were being taken.

On human rights, he warned of the risk of climate apartheid, where the wealthy could avoid the worst excesses of climate disruption as “they can simply move, and move country if needed”.

Prof Alston said human rights violations always affected the poor most, and in the case of climate change he predicted it would be by a factor of four, with the global south being most vulnerable.

While Irish people might remark “we are not going to burn”, people in the global south face wipe-out in one go and have no insurance or government subsidies.

This would lead to climate migration and he believed it would eventually lead to hundreds of millions being forced to move. He also predicted that food supplies would be dramatically challenged across the planet.

Prof Alston told an event, hosted by the human rights committee of the Bar of Ireland and the Irish Centre for Human Rights (ICHR) with the Ryan Institute in NUI Galway, that the human rights community was not very responsive though it was very exercised on the right to live and capital punishment, and yet millions were being “executed by climate change”.

The worsening climate crisis was also a threat to democracy, which was shown to be “pathetically incapable of responding to climate change” as politicians remain locked into short-term election cycles, he said.

ICHR director Prof Siobhán Mullally said climate change threatens human rights and that “activists, lawyers, governments and policymakers need to mobilise and to take courageous and bold steps now to safeguard the future of our children and the fragile protections of human rights that we have fought to defend”.