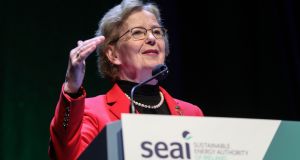 In an address to 800 representatives from public bodies and government departments, the climate activist and chair of the Elders group of global leaders said the days of “pick and choose” from the Paris Agreement on climate change must end.

She said the 2015 pact was weak on enforceability, but the latest climate science indications from the UN and a threatened loss of one million species meant “we can no longer afford for it to be voluntary”.

She said public bodies needed to step up, provide vital leadership and engage the public with clarity on the right course. This should be backed by fit-for-purpose supports and grants, said Mrs Robinson.

SEAI chairwoman Julie O’Neill said it was striking that the climate issue was not at the heart of the election debate. While she was initially disappointed about that, she believed “it demonstrates it’s not a divisive topic because everybody has bought in”.

SEAI chief executive William Walsh said: “We need to rapidly decarbonise our 350 public bodies and 3,700 schools and move away from fossil fuels. This will require unprecedented effort, leadership, resources and collaboration in the sector.”

He said Ireland could no longer be complacent about climate action. “Our citizens expect that every public organisation will have a workable plan to help decarbonise our society. Only when there’s commitment like this will we see the change that’s needed.”

Fergus Sharkey, SEAI’s head of public and private sector business, said notable progress in energy efficiency – “avoided energy” – was achieved in recent years in public buildings, but the big switch over the coming decade would be to decarbonisation.

A vast programme would be implemented with no hiding place for those failing to deliver. With €750 million from the national development plan and other funding for schools and universities, a total of €1.2 billion would be available for retrofitting buildings.

He said skills shortages would have to be addressed. Many engineers and architects to lead projects were required, along with plumbers, electricians and builders on the ground.