Majority of Irish people in favour of wind energy – survey 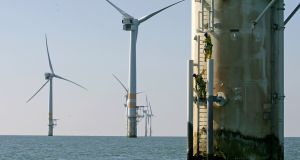 At a national level, 79 per cent said they were either strongly in favour or tend to favour wind power, according to the survey. Photograph: David O’Brien

A majority of Irish people say that they are in favour of wind energy and that climate change will influence who they vote for at the next general election, according to a new survey.

It found that some 55 per cent of respondents said climate change will either “greatly” or “somewhat” influence who they are likely to vote for. Among rural dwellers, who live closer to wind farms, results were nearly identical to the national sample at 54 per cent.

The survey also polled people’s support for wind energy projects, which have become the focus of strong campaigns of local opposition during the planning process in recent years. At a national level, 79 per cent said they were either strongly in favour or tend to favour wind power. For rural dwellers, the overall figure for support was the same, although 48 per cent said they were strongly in favour against 52 per cent nationally.

Support for wind power dropped significantly when respondents were asked about the development of wind farms in their locality. Nonetheless, slim majorities at a national level (55 per cent) and among rural dwellers (51 per cent) still favoured wind farms. The online survey was carried out among a nationally representative sample of 1,019 Irish adults. A supplemental survey sampled 200 residents in rural areas, spread between the countryside, villages and small towns.

David Connolly, the chief executive of IWEA, said there is a contradiction between the relatively high levels of support for wind energy indicated by the survey, and Government proposals on planning and noise emissions which he said would undermine the growth of wind power in Ireland.

“At the very moment we need to be developing wind energy at record levels the Government, through restrictive new planning guidelines, is undermining efforts to achieve its own targets for renewable electricity.”

Minister for Planning Eoghan Murphy and Minister for the Environment Richard Bruton published draft wind energy planning guidelines before Christmas. The guidelines propose new noise standards and minimum setback distances between wind farms and homes of four times the height of the turbines used at the plant. A minimum setback distance of 500m has also been proposed.

IWEA said the new noise limits are “potentially the harshest in Europe” and “will cost every person in Ireland an extra €550 in order to hit our 2030 climate action targets”. Dr Connolly said that “it is clear that candidates and parties putting forward policies designed to tackle climate change, including supporting renewable energy like wind power, will be rewarded for it on election day”.