Leaders remain in disagreement over outcome to UN climate talks 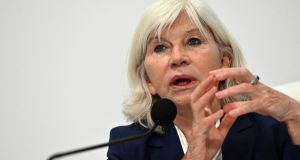 Laurence Tubiana during the Madrid summit, on Friday. There has been a lack of political leadership, she said, but Europe’s deal endorsing net-zero emissions by 2050 was ‘the best news this week’. Photograph: Fernando Villar/EPA

As global leaders remained embroiled in disagreement on a final outcome to the UN climate talks in Madrid, sustained pressure from countries seeking an ambitious deal built throughout Friday – with most blame heaped on Brazil, Australia and the US.

Countries pushing for “higher ambition” included the EU, and small island states already badly affected by climate disruption, who were insisting on a deal matching the integrity of the landmark Paris Agreement.

The talks aim to agree outstanding details of how to implement the pact to avoid catastrophic global warming ahead of a crucial implementation phase next year.

The French economist Laurence Tubiana, head of the European Climate Foundation, who played a central role in getting the agreement across the line, outlined at a press briefing what she believed was realisable in the coming hours at COP25 as the talks among almost 200 countries looked set to run into Saturday. Chile later announced the talks, which had been due to end on Friday, would resume at 6am Irish time on Saturday.

A lot of countries were pushing for enhanced ambition for next year, she said, reflecting “dissonance on the street” demanding more urgency, and changes in the real economy already happening.

That made it unlike other COPs, she said, as countries in negotiating rooms were considering how “this process” could endorse what was going on in the outside world.

That represented a big shift in her view, not only in the financial system but meant “a new social contract” on a just transition was on the table, which was critical if climate change was to be tackled.

The potential elements for a strong final decision were agreement that all countries must enhance their climate ambitions for next year; “no cheating on the carbon market” and protection of the most vulnerable through “loss and damage” measures.

Essentially, these elements were necessary “to maintain the environmental integrity of the Paris Agreement”, she added.

By late afternoon Friday there were some indications of better progress on article 6 in the agreement on carbon market rules, and more positive indications on supports from wealthy countries under loss and damage. Brazil, Australia and the US, however, were identified as the persistent blockers of progress.

There had been a lack of political leadership, Ms Tubiana said, but Europe’s green new deal endorsing net-zero emissions by 2050 was “the best news this week”, as it meant the EU was playing a leading role again. She also welcomed prime minister Boris Johnson confirming net-zero by 2050 for Britain in his first speech after winning the UK election.

Governments would face a tough time in implementing strong climate policies and needed to give capacity for citizens to voice their concerns. “Fossil fuels will not go overnight but we have to keep the pressure on,” Ms Tubiana said.

The shift in banking, in not supporting coal investments, was already in train, while the European Investment Bank would no longer finance oil and gas.

With renewables becoming so cheap – “offshore wind in the UK will be cheaper than gas in 2023” – she said there was no excuse for countries not to commit to net-zero; “and we have a year to do it under the Paris Agreement”.

Earlier new European Commission vice-president Frans Timmermans, speaking with representatives of countries making up the High Ambition Coalition, said net-zero commitments were needed to match long-term commitments of the agreement. “You can only get there if you start now,” he added.

That meant concrete steps and implementation backed by accountability, which was the critical framework needed for COP26 in Glasgow next year.

On a possible COP25 deal, he said: “We cannot accept a compromise that jeopardises environmental integrity. People in the outside world want something to ensure the world does not go beyond 1.5 degrees...Show the outside world COP25 means business.”

When asked what role China was playing in negotiations, Ms Lubiana said “they are quiet; they are contributing”.