Is there plastic in your teabags? Most probably yes

One Change: Pyramid teabags release 11.6 billion microplastics into each cup of tea 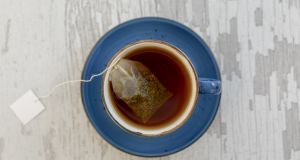 Common teabags are still mostly made of paper, but they can contain plastic fibres woven through the paper to help them maintain their shape when boiling water is added. Photograph: iStock

There’s enough to worry about in this world without having to think about teabags, and yet new research by McGill University is giving us reason to. The study reveals that trendy nylon pyramid-shaped teabags used for many high-end teas release approximately 11.6 billion microplastics and 3.1 billion nanoplastics into a single cup. What this must do to our bodies is alarming, but even worse is the ultimate effect it has on our rivers and oceans.

The common teabags used by many of us every day are still mostly made of paper, but as gardeners will attest, they leave behind them a fine grey web of micro-plastics in the soil when composted. Plastic fibres are often woven through the paper to help them maintain their shape when the boiling water is added, as this helps to diffuse the flavour.

And so, yet another perfectly compostable item has become a potential toxic residue that will continue to pollute the environment for eons. This is especially relevant to Ireland – we drink the most tea per person in the world after Turkey, according to a global survey published by Statista in 2016.

Barry’s Tea uses a petroleum-based plastic called polypropylene to seal their teabags, though after numerous negative media articles and an online petition, the Cork-based company has promised to phase it out. Progress has been painfully slow, and while they continue to trial new biodegradable solutions, you may want to switch to a company that has already adapted new technologies, such as using ultrasound to seal the teabag, or stitching it with organic cotton.

Lyons teabags, made in the UK and owned by the global conglomerate Unilever, has phased out plastics entirely from their packs of 40, 80 and 160 teabags, but the large 240-bag box will still contain plastic for another few months. Instead of polypropylene, the company now uses a biodegradable material derived from corn starch to seal the bags. It’s called PLA, or polylactic acid, which is supposed to break down in a home compost bin but could take some time. It is recommended that it goes into an industrial civic composter.

The real challenge is not so much with the pocket-type teabags, but with the pyramid-shaped ones. Some high-end companies are replacing the nylon with biodegradable material made from corn starch, which is treated with an enzyme that allows it to be spun into filaments. Biodegradable means they can be broken down by a biological process, but that could require industrial composting using heat rather a garden compost bin. To ensure your tea is easily home compostable, use loose leaf tea, which should also save you money, and dramatically increase the quality of the tea you are drinking.