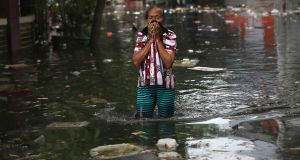 Flooding in Jakarta, Indonesia: The world is dangerously behind in climate action, a scenario compounded by a weak outcome to the recent annual UN climate talks in Madrid. Photograph: AP Photo/Dita Alangkara

A radical overhaul of climate policy was called for in two of the most significant reports during the past year on responding to global warming in the Irish context – a landmark report from an all-party committee, followed by the Government’s climate action plan.

The overhaul relates to governance and includes a move to carbon budgets – setting limits on emissions – tightening regulations, improving oversight, and ensuring the best scientific input.

It may be the most bureaucratic and technical part of both reports but it adds up to the most important reforms in climate action. Its most significant element is legal enforcement; providing the best prospect of implementation. The Climate (Amendment) Bill, a broad outline of which is published on Monday, is the essential driver in delivering that radical shift in approach.

It enshrines in law key measures, while ensuring continuity in spite of any change in government. Minister for Climate Action and Environment Richard Bruton has signalled that it is his intention to have the Bill in place before the election this year.

If Irish politicians of all hues are committed to tackling the climate emergency urgently, they will find a way to get this piece of legislation into place before people go to the polls. The ability to quickly force global carbon emissions into a downward trajectory over the next decade is critical to have any possibility of containing temperature rise to within 1.5 degrees.

Having a robust framework in place, reinforced by five-yearly carbon budgets, setting out how much carbon can be emitted within that period, backed by sectoral targets – and all set in legislation is an effective mechanism to impose discipline with accountability.

Parallel to this is Ireland’s first National Energy and Climate Plan (NECP), which is due to be submitted to the European Commission later this month. This will set out targets to reduce greenhouse gas emissions and adopt renewable sources of energy up to 2030, with a high degree of specificity on how this will be achieved.

Essential in that mix will be a national target of at least 7.8 per cent per annum emissions reduction up to 2030 if Ireland is to do its fair share globally – currently it is 2 per cent – and an emissions impact assessment of the National Development Plan for coming decades.

By acting on these fronts (legislation, NECP and revised ambition), only then can Ireland say with credibility it is finally set on a clear track towards decarbonisation in full alignment with the Paris Agreement.

Separately, it has to invest hugely in adaptation to ensure the country can withstand inevitable effects of a warming world – notably storm surges, droughts and flooding.

The world is dangerously behind in climate action, a scenario compounded by a weak outcome to the recent annual UN climate talks (COP25) in Madrid. It heaps additional pressure on key global gatherings during 2020 – the UN General Assembly in September; the global biodiversity summit in China in October, and COP26 in Glasgow in November which is coinciding with a potential cliff-edge scenario as the UK leaves the EU.

Under the Paris Agreement, this is the year countries are due to significantly scale up climate ambitions and outline how they will do it.

Further delay in Ireland’s response by failure to have the Bill in place and the time it takes to form a new government would be a bad signal of intent and undermine international efforts of high-ambition countries. Accordingly, there is a case for parliament sitting day and night, if necessary, to get this legislation in place.