Imagining 2050: The Ireland of the future 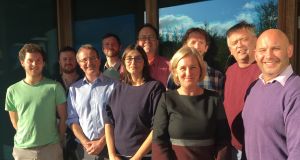 Members of the multi-disciplinary Imagining 2050 team.

A cross-disciplinary research team from University College Cork (UCC) and Queens University Belfast (QUB) is working with communities already impacted by extreme weather events on how they imagine Ireland will be in 2050.

Although public awareness about climate change has grown hugely in the past 12 to 18 months, there is still a lot of confusion in communities about what actions are the most important to tackle greenhouse gas emissions and how towns, villages and cities across Ireland can best adapt to the impacts of climate change.

Now, this innovative UCC and QUB research project, Imagining 2050: engaging, envisioning and co-producing pathways to a low carbon resilient Ireland seeks to clarify issues and explore with local communities how they can have a sustainable and socially inclusive future.

“The research project is an example of how social sciences can be integrated into the science domain,” explains Dr Ger Mullally, sociology lecturer at UCC and lead coordinator of the EPA-funded project.

Researchers suggest social scientific research of this nature can ultimately be the bridge between scientific knowledge of the problem and the local lived experience.

“Some of the most challenging problems relating to climate change are social in nature. And quite often, the biggest challenge is to create a link between the scale of climate change and its implications for the day-to-day reality of people living, working and caring in their communities,” says Alexandra Revez, senior postdoctoral researcher on Imagining 2050.

So throughout 2019, a broad mix of researchers (civil engineers, energy engineers, environmental scientists, chemical engineers, social scientists and geographers) ran workshops and seminars in two communities – Ballincollig, Co Cork, and Athlone, Co Westmeath. These areas had already been severely impacted by flooding in the past few years. In 2020, the research team of 12 principal investigators and several volunteer PhD students will work with coastal communities.

Brian Ó Gallachóir, co-leader of the project as director of MaREI (the Science Foundation Ireland research centre for energy, climate and marine research) and professor of energy engineering at UCC says having a wide range of disciplines working together is essential to achieving the goals of Imagining 2050.

“The purpose of Imagining 2050 is to develop new approaches for climate dialogue using mini-publics. We have brought together experts in energy engineering who understand low-carbon – climate mitigation – technologies, experts in environmental science who understand what we need to do to adapt to the impacts of climate change, experts in sociology who understand how to effectively engage with communities on transition. Having this wide range of disciplines is challenging but also essential,” he adds.

The community-based work is carried out over two weekends and participants first explore their visions for their community and then identify key pathways for change, Revez says.

In brainstorming exercises in Athlone, workshop participants spoke about how they felt about climate change. Many said it leads to uncertainty and unpredictability, which isn’t surprising since these communities had already witnessed or suffered from extreme weather events. “Uncertainty is a limiting aspect of climate change for many people. So we need to be more explicit about what we know and don’t know. By doing this, we can help people take ownership of the risks at local level,” Revez adds.

Innovative methods such as empathy mapping (using story boards defining the problems and the solutions) were used to deepen the experience of participants. So, for example, participants were asked to imagine how specific citizens in the future (a farmer, a teenager and an older person) will react to climate change.

Further brain-storming exercises linked solutions with problems under the headings of housing, energy and health. And as part of the process, the workshop participants in Athlone mapped out how their town needs to adapt to [to cope with changes caused by weather events] and mitigate against [to reduce greenhouse gas emissions] climate change.

“Mobility was seen to be a big issue in Athlone and people weren’t sure how to deal with the challenge of car dependency. Yet, there was an awareness about how connecting with your community to solve these issues could improve people’s health and wellbeing,” Revez points out.

Together, the group mapped new future ways to travel around Athlone with a ban on cars entering the town centre; family-friendly cycling routes, looped bus routes, bike parking and a walkway along the River Shannon. Reclaiming the market square as a food market rather than its current status as a car park was another key future scenario.

“Climate change is a stressor for society which has the potential to create enormous vulnerability yet it can have social benefits if a strong resilient health sector is part of the solution,” says Revez.

The participants in workshops in Athlone also put great emphasis on the role of preventative healthcare, with strong primary healthcare and social infrastructure as essentials for this to be effective. “People didn’t imagine Ireland 2050 as a futuristic place with flying cars. Instead, they put a strong emphasis on getting the basics right to cope with the stressors coming our way,” she adds.

Ultimately, those who engaged with Imagining 2050 told researchers that while many of them didn’t change their views – they still felt uncertain and concerned about the future – they were more willing to take part in climate change activities and, crucially, they felt they had a greater sense of hope about coping with the future.

Revez says that by working with local communities, researchers gained a better understanding of not only the issues people face but also the capacity for resilience in the community.

The researchers working on Imagining 2050 already have significant experience in informing national policy on climate action, Ó Gallachóir says. MaREI’s Climate Ireland team produced the first set of climate adaptation guidelines for the Government and MaREI’s Energy Policy and Modelling team are currently assisting in the development of the long-term strategy for a low-carbon society.

“The results and learning gained from Imagining 2050 will be brought to Government directly through policy briefs and thought leader workshops, but also indirectly, through committees and other projects, in which the Imagining 2050 researchers are participating in,” he adds.