Housing bill flies in the face of environmental democracy

Individuals, NGOs would lose right to take environmental cases to court under Bill 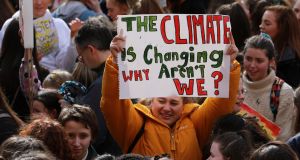 The declaration by the Dáil in May last year that Ireland is facing a “climate and biodiversity emergency” would suggest that there is Government recognition of the scale and seriousness of the climate crisis.

This year marks the beginning of a decade in which global emissions must reduce by 55 per cent, if the 1.5 degree limit in the Paris Agreement is to remain at all feasible. However, Ireland has consistently underperformed and ranks among the worst performing countries in Europe. This under-performance has been increasingly called out by environmental NGOs as well as grassroots and youth-led movements.

It is in this context and, following the recognition by the High Court in 2017 of an implied constitutional right to an environment that is “consistent with human dignity and wellbeing”, that environmental democracy must be protected and strengthened rather than threatened and restricted.

Environmental democracy ensures that the State is fully transparent and accountable to the public about policy decisions that affect them and their environment, and provides participatory opportunities for communities to determine land and resource use. It involves the right to freely access information about the environment; the right to participate meaningfully in environmental decision-making; and access to justice when those rights are denied. These rights are protected in the Aarhus Convention, which has been part of the EU legal order since 2005 and was ratified by Ireland in 2012.

However, proposals contained in the new Housing and Planning and Development Bill 2019 to “safeguard the timely delivery of projects and value for public money” look to significantly restrict environmental democracy. The legislation would, according to the Environmental Pillar, a coalition of national environmental organisations, “row back on major changes introduced just a few years ago to enable ordinary people, their organisations, and environmental NGOs to challenge bad environmental decisions. Those changes were already long overdue and necessary to comply with EU law and the Aarhus Convention”.

If passed, the Bill, brought forward by Minister for Housing Eoghan Murphy, would add new cost requirements and standing restrictions to bring Judicial Review proceedings in relation to planning decisions. While individuals and groups can appeal local authority planning decisions to An Bord Pleanála, decisions made by the national planning authority can only be challenged through judicial review proceedings in the High Court, an already costly and time-consuming process.

Under the Bill, many individuals and NGOs would lose the right to take cases to court on environmental matters. Currently, NGOs enjoy broad standing rights to bring environmental challenges and the public generally enjoy the right to challenge decisions. However, the Bill proposes that applicants show “substantial interest” (rather than the current “sufficient interest”) and must be “directly affected by a proposed development in a way which is peculiar or personal”. The new proposals also require NGOs to be in existence for three years and have a minimum of 100 members. This would not only eliminate many grassroots community groups that form sporadically in reaction to local environmental issues but would also rule out many national NGOs from taking legal challenges – such as Friends of the Irish Environment, a group that has brought many important legal challenges in recent years.

The Bill also proposes changing the special costs rules that currently apply to judicial reviews of decisions which have an impact on the environment. In these types of cases, the normal rule, that the losing side must pay the winning side’s legal costs, is not applied. This allows cases to be taken without the fear of an enormous costs order, should they fail. Such cases are generally taken on a no-foal, no-fee basis as legal teams have the possibility of recouping costs if the case is successful, is of exceptional public importance and where it is in the interests of justice.

The Bill proposes creating a protective costs cap for individual plaintiffs of €5,000, €10,000 for groups and €40,000 for defendants. This risks making it prohibitively expensive (as well as unpredictable in terms of expected costs) for the public and environmental NGOs to take legal cases, dis-incentivising litigation. It is unlikely that it would be considered compatible with the Not Prohibitively Expensive Rule under the Aarhus Convention and related EU Directives. This curbs the “wide access to justice” that both demand.

The Bill represents a retrograde step in terms of fulfilment of our obligations under EU law. However, in the context of the “climate and biodiversity emergency”, we should not facilitate access to the courts in environmental matters simply because the EU tells us to. Mobilisation within communities around environmental matters is increasing and should be encouraged particularly in the context of the successive failures of government. The Bill, in its current form, will have a chilling effect on environmental litigation and will seriously damage environmental oversight and democracy in relation to bad and unlawful planning decisions.