You need to have a plan on how you are going to decarbonise your assets over time...that is the big task, says EU Commission climate change boss 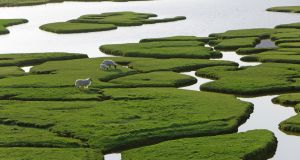 Artur Runge-Metzger, accepted emissions from farming could not be eliminated “but there is a need to bring them down a little bit” while scaling up carbon removal using trees and soil

The business case for investment in green technologies has been enhanced by the fact that they are now “so much cheaper”, according to the head of the European Commission’s Directorate-General for Climate Action.

Speaking in Dublin, Artur Runge-Metzger, said consumers were already persuaded, because of the prospect of lower fuel bills, especially associated with electric vehicle use.

Moreover, “there is a change in attitude” in industry and key sectors who are coming up with their own strategies to achieve climate neutrality by 2050 – and demanding the right policy framework from government.

As for the financial system, it was “at the start of a big journey”. A new taxonomy of sustainable financial products was in place supporting sustainable economic growth. “This is moving a lot of private money,” he added.

This was confirmed by the shift in approach by big investors, including insurance and pension funds – “even the Blackrocks of this world” – whose biggest fear was stranded assets; especially with fossil fuel infrastructure.

Speaking before delivering an EPA climate lecture at the Mansion House, he said Ireland faced climate policy challenges including issues about the level of its carbon emissions, but there was now political willingness to address them with greater urgency.

The main difficulties were the need to transform transport infrastructure with low- or zero-emission vehicles; renovate housing to reduce CO2 and improve energy efficiency, and address agriculture; “perhaps the most difficult sector”, he said.

He accepted emissions from farming could not be eliminated “but there is a need to bring them down a little bit” while scaling up carbon removal using trees and soils. Any change in calculating agricultural emissions had to be science based. While he accepted the methodology of assessing methane – the main greenhouse gas associated with farming – is changing, it had to take into account “it’s a potent warming agent”.

The 2050 net-zero target was flexible across various sectors, but had to achieved and carbon capture and storage technology would be needed, but not associated with fossil fuel industry as was envisaged in the past. The preference was to do it in a biological way, while carefully assessing climate impacts.

Natural gas would be needed temporarily, especially in industry and heating, a view endorsed by the new European Investment Bank approach is support green infrastructure. But any new gas infrastructure could not become a stranded asset in coming decades. “You need to have a plan on how you are going to decarbonise your assets over time...that is the big task.”

Decarbonised gas such as biogas, biomethane from non-fossil fuel sources, such as hydrogen from electricity generation, would all play their part.

Mr Runge-Metzger outlined the immense significance of the European Green Deal (EGD) intent on making Europe the first climate-neutral continent by 2050. It meant sustainability would be “mainstreaming in all EU policies”.

Key aims were to have a 50 to 55 per cent reduction in emissions by 2030, and to set out how that can be achieved across Europe with EU supports. This would be encapsulated in its plan to be presented at key COP26 UN conference in Glasgow next November. The legislation to facilitate this was due to be finalised in June 2021.

The EGD roll-out would scale up in March with publication of the European Climate Law enshrining the 2050 objective in legislation, he said, which would be quickly followed by new strategies on industry and biodiversity and a circular economy action plan. The investment plan for a sustainable Europe and a just transition fund of €100 billion were already unveiled.

Good governance would be critical, Mr Runge-Metzger added, including mechanisms to ensure Europe was on track.

He confirmed 19 member states have submitted national energy and climate plans, with the remainder delayed for political reasons. Ireland’s NECP had not been submitted but was expected once the election was over, and would be a good opportunity for the new government to signal intent on the climate issue, he believed.

While member states were required to set out what they are going to do, in what in effect are “investment plans”, it was also an opportunity for the EU to help make it happen.

Ireland’s draft NECP submitted last year was found by the Commission to be inadequate but he stressed it did not capture the government’s subsequent climate action plan, which “should mean a step-up in ambition”.

While everybody was agreed on the need for urgency, there were obstacles on moving forward; “there is a lot that needs to happen this year”. Uncertainties were not on the EU side, he stressed.

Referring to the world’s largest emitter China, he asked “are they ready to step up ambition?” If Europe and China decided to move forward together it would send an important signal to the world.

On the UK’s key role in attempting to secure more ambition from signatory countries to the Paris Agreement at COP26, he said Britain was determined to make it a success, and had the diplomatic skills to do so, whereas separate diplomatic resources would needed for trade negotiations with the EU post Brexit.

That said, “it needs a very skilled politician who will be able to bring people together. If you look back at Paris in 2015, [COP21 president] Laurent Fabius had those skills and had a very high reputation”.

The EGD required a major transformation and modernisation of the European economy and society within the next three decades that leaves nobody behind, notably “the poorer sections of society”. That was beyond the usual consideration of rich and poor states, he added.