COP25: No indication of significant breakthrough on key issues at Madrid summit 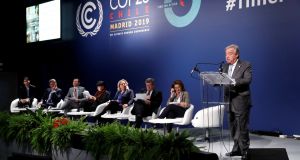 United Nations secretary general Antonio Guterres has again intervened with global leaders meeting in Madrid in an effort to forge a meaningful outcome to two weeks of talks on climate change. Photograph: EPA/ZIPI.

United Nations secretary general Antonio Guterres has again intervened with global leaders meeting in Madrid in an effort to forge a meaningful outcome to two weeks of talks on climate change, warning that failure would mean “economic disaster”.

As COP25 moved into its final hours there was little indication of a significant breakthrough on key issues such as scaled-up commitments by big carbon-emitting countries; putting in place a robust rulebook on carbon trading, and increasing supports for countries most vulnerable to climate shocks.

“For too long, vested interests have peddled the false story that economic growth and tackling climate change are incompatible. This is nonsense. In fact, failing to tackle global heating is a sure-fire recipe for economic disaster,” he added.

Ireland has been supporting the EU position on key aspects of a possible deal. Minister for Climate Action and Environment Richard Bruton said the EU was insisting on an outcome reflecting higher ambition in line with Europe’s green new deal (GND). As a consequence, it was not accepting any old deal, or over dilution of that position, he said.

“The next few days will tell the tale of whether countries here will face up to the commitments they signed up to in Paris [IN 2015], or whether the large numbers of interested groups here to make a profit out of carbon trading rather than protecting the legacy of the next generation win out,” said Irish climatologist Prof John Sweeney, an observer at the talks.

The GND set the terms of discussion after it was announced on Wednesday as countries negotiated on whether to agree an objective of global carbon neutrality by 2050. “This continues to be a stumbling block for some countries. But even the EU Commission is now facing opposition from some countries in the European Council, ” he said.

Prof Sweeney added that a big obstacle to success remained the position of some countries that want to “double count” credits for forestry. The issue of carrying over huge unused credits from earlier programmes is being highly divisive.

“Such an arrangement would enable countries such as China, India and Brazil to continue to hugely increase their emissions and torpedo the Paris [agreement] objectives. This is a case where no deal would be preferable to a bad deal.”

Ireland South MEP Mick Wallace, a member of European Parliament delegation at the talks, said “most countries still haven’t gotten over the hurdle of setting aside their own self interests in order to make better long-term decisions for our environmental future.

“We are failing to do the right thing, because we are still making short-term decisions in our own interest, rather than making the better long-term decisions which are absolutely crucial for the environment,” he added.

With the US surrendering it’s leadership role on the global stage there was a need for the EU to fill that void and agree a grand bargain with China at a special summit in Leipzig in September, said Mohamed Adow, director of Power Shift Africa.

“But with 28 countries in the EU, which all need to be aligned, the EU must get it’s act together quickly if they are going to be able to get their new climate plan on the table in time.

“If we get a good deal between the EU and China it will lay the ground work for a successful summit in Glasgow next year. The EU would look mighty foolish if global action to tackle climate change failed because the EU couldn’t do it’s homework on time.”

He said a shrinking Common Agricultural Policy (CAP) budget could no longer be used to address the growing number of asks placed on farmers.

“The measures proposed in this green deal [and] Europe’s climate neutrality agenda will see new requirements, which will require an increased budget.”

Mr Healy called on the EU to defend, on the basis of science, the sustainability of its agricultural model and food production systems in the face of “misinformation and bashing by those with anti-farming agendas”.

“The European Commission are proposing to import thousands of tonnes of beef from deforested Amazonian regions of Brazil and other areas,” he noted.

Mr Healy said farmers must also receive full credit for carbon that is sequestered and stored in their grassland, hedgerows and forestry.

“Everyone aggress that sustainability is important, but sustainability is also about economic and societal sustainability, as well as the environment. Therefore, the European Commission must ensure a full analysis is completed so we understand all impacts of the proposed GND for European citizens, including farmers.”