The EU wants its message to be heard. It is serious about climate diplomacy 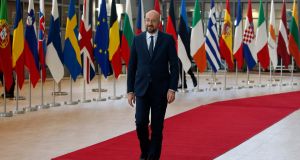 As “commitments” go it might appear somewhat half-hearted. “The European Council endorses the objective of achieving a climate-neutral EU by 2050,” is how the EU summit’s expected “conclusions” on Wednesday express the support by leaders for the commission’s Green New Deal. The deal was close and likely, but not quite there as we go to press.

But a real commitment it is, with teeth and serious purpose, with real legal obligations and heavy financial commitment coming down the line, as the EU was telling the participants at the Cop25 climate summit.

Europe is determined as Council President Charles Michel echoed on Thursday morning to provide the “leadership” on a world scale on the issue.

The slightly ambivalent language, a product of the constraints of unanimity voting, was the result of a necessary compromise with those member states - Poland, the Czech Republic and Hungary - who were complaining that their particular dependence on fossil fuels needed to be recognised with special financial assistance.

Hence also the support in principle for the commission’s proposed €100 billion “Just Transition Mechanism” , although approval of the actual cash would have to wait on the outcome of the 2021-27 budget (MFF) talks.

The Council “will return to this issue in the framework of the MFF negotiations,” they promised.

Just enough to placate the Poles.

Critically, however, the leaders gave an enthusiastic green light to the commission to continue to set out their ambitious programme of action internally and to step up its climate diplomacy internationally.

There is an explicit acknowledgment of the scale of likely investment challenges with the leaders welcoming a commitment by the European Investment Bank, the EU’s huge bank, to one trillion euros of investment in climate and environmental diplomacy.

Nothing is sacred, they said, inviting the commission to examine “an adjustment of the existing rules , including on state aid and public procurement”.

And they backed the idea proposed first by the French of border customs duties on goods produced using too much carbon.

The EU will police not only its own emissions but use trade and other tools to toughen up international standards and compliance with the Paris agreement.

“The climate objective needs to be achieved in a way that preserves the EU’s competitiveness including by developing effective measures to tackle carbon leakage in a WTO-compatible way,” the conclusions say.

“In this context the EC takes note of the Commission’s intention to propose a carbon border adjustment mechanism concerning carbon-intensive sectors.

“Facilities in third countries need to adhere to the highest international environment and health standards.”

The EU wants its message to be heard. It is serious.