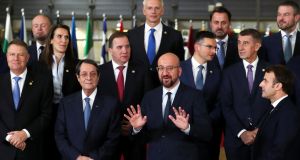 Coal-dependant Poland insist the target is too difficult for it to reach.

The central thrust of their Green Deal strategy was held up at the summit in Brussels by disagreements with three fossil-fuel-dependent member states about financial help with their transition plans, and the leaders adjourned their lengthy discussion to reach agreement only early on Friday morning.

There is general agreement on the need to aim for 2050 and agreement in principle to the idea of a “Just Transition Mechanism” with a notional budget of €100 billion, which would be targeted at countries with particular fossil-fuel dependence.

The fightback was being led by Poland, Hungary and the Czech Republic, but the majority remained adamant that they would not prejudice the discussion on the EU budget with specific financial commitments.

Poland, which relies on coal for 80 per cent of its energy, wants the EU to allow “extra time” past 2050 for the most fossil-fuel reliant economies to make a transition to green energy sources. Warsaw has warned that its economy needs hundreds of billions of euro and that hundreds of thousands of jobs are at risk.

“The costs of energy transition are higher than in other countries that were more fortunate in the past and had a chance to run their economies on a range of energy sources,” Mateusz Morawiecki, Poland’s prime minister, said ahead of the summit.

France’s president Emmanuel Macron hailed the likely decision on 2050 as a major achievement, saying that France had only got the support of three states on the issue only eight months ago.

Mr Macron also raised some eyebrows by insisting that, although the EU would allow every member state to design its own energy mix as an alternative to fossil fuels, nuclear power would be an essential ingredient in the mix.

The Czechs successfully insisted on an explicit acknowledgment of the need for nuclear power in the summit declaration.

EU officials say, however, that there is no question of the transition funding being used to pay for nuclear power. The “Just Transition Mechanism” will only be used to help reskill workers and to invest in renewable projects, they say.

Over dinner on Thursday night, the leaders also exchanged views over the EU’s deadlocked 2021-2027 budget negotiations.

The summit urged council president Charles Michel to make plans for the opening next summer of a conference on the future of Europe to equip the union for new challenges 10 years hence. It will involve all the EU institutions as well as national parliaments.

Some scepticism and concerns, however, that the conference may end up distracting the union from its other work was reflected in a caution that “The European Council recalls that priority should be given to implementing the strategic agenda agreed in June.”

The leaders expressed their “unequivocal solidarity with Greece and Cyprus” in their disputes with Turkey over the latter’s illegal drilling off the Cyprus coast. And in a very categorical statement, they repudiated a recent joint declaration between Turkey and Libya: “The Turkey Libya Memorandum of Understanding on the delimitation of maritime jurisdictions in the Med Sea infringes upon the sovereign rights of third states, does not comply with the Law of the Sea, and cannot produce any consequences for third states.”