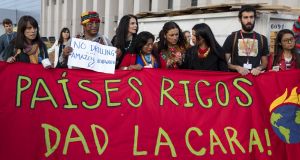 Environmental activists protest as they hold a banner reading ‘Rich countries, Face!’ at the start of a plenary session during the COP25 Climate Conference. Photograph: Pablo Blazquez Dominguez/Getty Images

Climate litigation against governments, corporations and fossil fuel companies continued to increase across the world during 2019 with more than 1,000 cases in train, according to litigants who at COP25 outlined a range of high profile cases being pursued.

Increasing number of citizens and NGOs started to use legal frameworks to hold their governments and fossil fuel companies accountable for failing to address the climate crisis, said Wendel Trio, director of Climate Action Network Europe.

“In some instances, courts have taken decisions to recognise that governments and big emitters are failing to protect human rights due to their climate inaction,” he said.

“Ireland’s emissions are still well above their 1990 levels and nowhere near a Paris [AGREEMENT]-aligned trajectory. In the absence of political leadership, civil society has taken to the courts to put science, human rights and climate justice at the heart of Ireland’s climate response,” said Sadhbh O’Neill of Friends of the Irish Environment. It is challenging the lawfulness of the Government’s National Mitigation Plan in the High Court.

She confirmed Friends of the Irish Environment’s intention to appeal the initial decision against them. While they had lost the case, she believed it “along with a growing climate movement, has pressed the Government to produce a new climate plan – one that will reduce emissions rapidly and deeply.”

“We’re hoping our appeal will be heard in 2020. In the meantime, it’s clear litigation and activism have already changed our decision-makers’ perception of climate risks and urgency,” Ms O’Neill added.

If an implementation gap on emissions continued to exist, Climate Case Ireland would continue bringing the Government to court, if it believed it had a case and would raise issues such a right to a healthy environment, she said.

Ireland was off course on all of its 2020 targets and even on its 2030 targets, she said. Adhering to the Paris agreement, required deep and immediate emissions cuts to its carbon budget, while its revised climate plan meant it was going to “overshoot even a minimally equitable fair share of the global carbon budget”.

Yeb Saño director of Greenpeace Southeast Asia outlined how “the Philippines petition” decision meant 47 corporations were found to be “legally and morally liable for human rights harms to Filipinos arising from climate change”.

He added: “For the first time ever, big polluting companies have been found responsible for human rights harms resulting from the climate crisis. A growing number of climate cases are now being heard or filed across the world-and with the conclusion of the investigation by the Commission on Human Rights of the Philippines, we believe many more communities will take a stand against fossil fuel companies that are putting profit before people.”

In May 2019, Dutch NGO Milieu Defensie, seven other environmental NGOs and more than 17,000 individual co-plaintiffs took the fossil fuel company Shell to court for worsening the climate crisis.

“Shell is one of the biggest emitters of CO2 in the world. Despite the fact that they have known about climate change and their own contribution to the crisis Shell did not change their policies,” said Nine de Pater from Milieu Defensie.

A report published last week, she said, showed Shell was planning to invest billions in new oil and gas. “The emissions from these projects will bring us far beyond 1.5 and 2 degrees warming. Shell will not change voluntarily. That is why we decided to go to court.”

Mr Trio accused the EU of playing a two-faced game of declaring a climate emergency and ignoring those affected by the climate crisis seeking climate justice in courts. “If the EU is serious to tackle the climate crisis, it must substantially increase its 2030 climate target in early 2020, without needing a court order to do so.”