Pilita Clark: Tackling the crisis will be hard enough without firms using it as an excuse 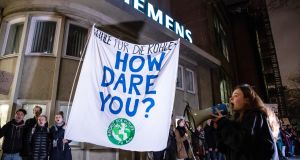 Siemens faced the wrath of protests over its decision to continue participating in the Adani coal project. Photograph: Hayoung Jeon/EPA

Not that long ago, I went to one of my favourite local restaurants and had a curry that was splendid but so enormous that I asked the waiter if he could bag up the leftovers so I could guzzle them later at home.

“Sorry,” he said. “I can’t. We have a no-takeaway policy because we’re trying to cut down on plastic use.” Customers who wanted to take food home had to bring in their own containers. I blinked at him. This was an unexpected development in the war on plastic and a baffling one.

I am all in favour of deterring single-use plastic. But when it involves dumping half a bowl of fresh prawn laksa in the bin, it does raise a question: why not offer a non-plastic, recyclable box instead?

The more I thought about it, the more the suspicion formed that the restaurant was using a classic eco-excuse, that greenwashing trick of pretending to be green to justify a spot of irksome cost-saving.

I would have forgotten about this had I not been interviewing a man a short time later about hot-desking.

He made a living from helping companies to ditch dedicated desks and he wanted to discuss an article I had written that complained about how this penny-pinching ploy cast people out into the noisy, chaotic wasteland of shared workspaces.

In an effort to explain politely that I was an idiot, he listed a familiar set of arguments for the hot desk. People met more of their colleagues. This improved collaboration and ultimately productivity. Then he told me there was another vital point that I needed to understand: “Carbon emissions.”

Yes, a company could save money by cutting down on office space, he said. But this also meant a climate-friendly cut in energy for heating and lighting, and who could argue with that? Actually, I thought, I could.

There is no doubt that carbon emissions need to be cut, fast. The rising public clamour for action to tackle the problem is welcome. So is the growing number of governments and companies setting net-zero emission targets, goals that were politically unthinkable only a few years ago.

Yet we are still at ground zero when it comes to the more fraught task of changing the way we eat, travel, work and live to meet those targets. Policies that make it harder or more expensive to fly, eat meat, drive a non-electric car or generally burn fossil fuels are not going to be uniformly popular.

Politicians are well aware of polls such as one in the US last year that showed 69 per cent of Americans want “aggressive” action to combat climate change – but only 34 per cent are keen on paying an extra $100 (€90) a year in taxes to help. Even fewer favour a $100 rise in annual electricity bills.

An earlier US survey showed nearly 60 per cent of people backed a $1 monthly charge to fight climate change. But that support plummeted to 28 per cent when the fee rose to $10 a month.

Other countries also have a gap between people’s desire for climate action and their willingness to pay for it.

In other words, cutting carbon emissions is going to be hard enough without businesses needlessly using climate change as an excuse for unpopular measures, especially ones as awful as hot-desking.

It is also a risky move at a time when what companies do and say about climate change is under intense and deepening scrutiny. Ask Siemens.

There was a time when the German industrial conglomerate might have been able to use its history as a big maker of wind turbines to flaunt its green credentials while continuing to make money from large coal mines. Last week suggests that time is coming to an end. On Sunday, the company’s chief executive, Joe Kaeser, released an agonised 1,800-word statement to explain why the group had decided to honour a contract to supply train-signalling gear for a contentious Australian coal project – despite opposition from green activists and some of his own employees.

“We should have been wiser about this project beforehand,” he said. “Had it been my own company, I may have acted differently.” I will be very surprised if he makes another deal like that one any time soon. Copyright The Financial Times Limited 2020