Climate legislation to go before Cabinet by Christmas, says Bruton 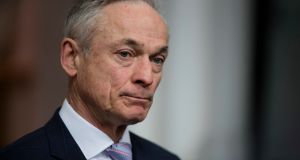 Minister for Communications, Climate Action and Environment Richard Bruton: ‘There is a high level of desire to deliver this in the Oireachtas.’ Photograph: Eamonn Farrell/RollingNews.ie

The heads of the Climate Change (Amendment) Act were ready to be considered by the Government, with a view to undergoing scrutiny in the Oireachtas early next year. It will enshrine revised 2030 targets and a commitment to achieve carbon neutrality by 2050.

Under carbon budgeting elements, key sectors such as transport and agriculture will have carbon limits in terms of how much carbon they can emit on a five-yearly basis.

Mr Bruton said he was heartened by the degree of consensus across the political system around climate and even around carbon pricing. The reality, however, was that there were “real hard policy issues involved” that will be difficult to manage, as indicated by the move to exit from peat extraction and its use in power generation.

The new renewable electricity support scheme was specifically designed to address such issues, he said, notably its community pot for supporting projects and provisions for community gain.

It was possible to get the legislation through before next year’s general election. The Bill would have to undergo pre-legislative scrutiny at committee stage which would take time, but “there is a high level of desire to deliver this in the Oireachtas”, Mr Bruton felt.

The strengthened climate legislation would also require a wider process to explain to citizens “why we there should be carbon budgets, when we set them what they mean – what they mean for different sectors and the way they plan. Getting that information out there is really important.”

He admitted that such was the scale of what was envisaged in decarbonising Ireland, the capacity and expertise to deliver that was not yet fully developed.

Mr Bruton said there was a discernible difference at COP25 compared to previous talks, as the concerns of young people were much more to the fore and this pressure was being felt in negotiating rooms, especially among EU colleagues.

Momentum had been built since the recent UN climate summit in New York, Mr Bruton believed. “They are articulating the sense of anger and frustration” in their determination to find solutions and contribute, he added.

The system was struggling to find ways of bringing that dynamic into the decision-making processes, he said. That said, there was a change in thinking: politicians and negotiators were conscious of the demands that were being placed on them. They equally applied to Ministers trying to effect change, he said.

The input of young people was one of the greatest assets in delivering change, Mr Bruton added.