Climate action will cost us – that’s why it is difficult 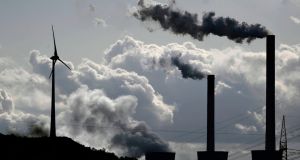 “We are behind the curve and have to decide how to tackle carbon emissions in key areas such as transport – especially private cars – and agriculture.” Photograph: Ina Fassbender/AFP via Getty Images

A global climate summit which fails to reach a comprehensive agreement, settling instead for some faltering steps forward. Was it the Madrid summit just finished a few weeks ago? Well it could be. Or it could also be the Cancun summit, which took place exactly a decade earlier in December 2010.

It would be a mistake to write off the intervening decade in climate policy terms as a complete waste of time, but you don’t need me to tell you that the pace of progress has been nowhere near enough. Nor that Ireland’s performance has been poor, with the latest figures suggesting just a tiny reduction in emissions in 2018 to 60.2 million tonnes of carbon equivalent, a good five million above our target.

It is always tempting in end-of-year columns to suggest that the following year will be some kind of turning point. And almost always wrong. But what is clear is that in terms of our domestic policy debate, the general election to come will have more than a green tinge – in fact, climate policy will be one of the real areas of contention and debate. It is the classic case of everyone agreeing that something should be done, but feeling that it is up to someone else to suffer the consequences.

Economics has ways of dealing with areas where the market fails leading to some wider societal cost – via prices and regulation which change behaviour and also encourage investment in new areas. But if this issue is to be addressed there will be consequences – to our lifestyles and our incomes. And despite the swell of protest led by younger people, there is not yet wider acceptance of this message.

In political terms it is all sold as a “green new deal” and a “just transition” with those affected getting some protection and compensation. But the rows start when it comes down to imposing new costs and taxes, which will now have to happen all the more quickly here given our inaction to date. And carbon taxes and the green bin are only the start of it. The future will involve – to take just a few examples – fewer flights, changed diets, electric cars and higher prices for many goods.

Remember the Government’s decision to ditch the proposed carbon tax increase in the 2019 budget, with a compromise €6 a tonne announced for 2020? Despite the overwhelming argument in favour of increasing the price of carbon-emitting fuels to affect people’s choices and behaviour, this is politically sensitive.

Many people are in favour of “climate action” but feel that the problems lie elsewhere. Those in rural Ireland feel a carbon tax is unfair to them, because they have to drive more. Those in the cities feel that the farmers and their herds of cows are a large part of the problem. And both sides point to “big business”, or America, or China. It is the classic case where everyone can see the cost, but no one has an individual financial incentive to change their own behaviour.

This is going to a big issue in the election with the Government, to its credit, finally committing to a target of increasing the carbon tax to €80 a tonne by 2030. The Green Party’s presence as a potential partner in the next government – and its strong support for carbon tax – will add some spice. So will Sinn Féin’s opposition to it, and its argument that it is unfair to the less well-off and merely a “PR stunt” to pretend to be doing something.

Of course the issues facing us all go beyond paying more for a fill-up of diesel or petrol. Take food prices. The price we pay now for what we eat and drink is around the same as it was 20 years ago. There are many trends playing into this, of course. But do we pay enough to have sustainably-produced food on our tables?

More generally, pressure on businesses is building quickly. Bigger polluters are already covered by the European Union emissions trading regime – and Ireland has made some progress here in areas such as power generation. But pressure on businesses is wider, going from consumers and also, interestingly, from their investors. And so note the number of companies now appointing people with titles such as chief sustainability officer. This is likely to accelerate the changes we are all starting to feel – and have a significant impact on our drive to attract foreign investment here. Companies, for example, will look for green energy and be attracted by environments with an emphasis on sustainability – good public transport, for example, and clean water – because this is what their staff will be looking for.

There are surely opportunities here for Ireland, as well as costs. We don’t have a history of big, polluting industries and much wealth here is now generated by services. But in the short term we have problems. We are behind the curve and have to decide how to tackle carbon emissions in key areas such as transport – especially private cars – and agriculture. Some of the necessary investment – in areas such as public transport – is outlined in the climate action plan published during the year.

But getting this done is a big job – and on its own will not be enough. Part of the political challenge is building public acceptance that this will cost – and discommode – us all, even if steps are taken to protect the least well off. And then there is the wider question of the implications of this for the “growth at all costs” strategy we pursue. The current spin is that growth and sustainability can sit together, but the trade-offs are surely real. And of course the long-term costs of inaction on cliinate change would be enormous,