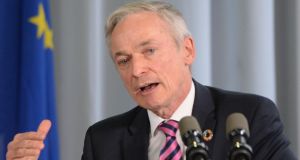 Minister for Climate Action and Environment Richard Bruton said his generation was at risk of passing on a world in worse condition. Photograph: Dara Mac Donaill

Ireland is firmly aligned with countries pursuing a course of high ambition to ensure they decarbonise their economies by 2050, Minister for Climate Action and Environment Richard Bruton has told the UN climate talks.

In an address to COP25 by way of national statement, Mr Bruton said Ireland was enshrining a “net-zero emissions” target for 2050 in law and confirmed it was joining the Carbon Neutrality Coalition (CNC), a global alliance of countries intending to decarbonise and to lead others in the transition. The CNC was meeting in Madrid with the hope that further momentum would be built.

Ireland over the past 12 months, in underpinning its ambitions, had put “concrete policy instruments” into the Government’s climate action plan, he said. How this was achieved provided lessons relevant to others because it was built on the foundation of a citizens’ assembly, which “has given us leverage across our community”.

A roadmap was in place with concrete actions and a governance structure embedded in law that would ensure accountability and require policymakers to achieve set goals.

On what had been delivered, he cited an end to oil exploration; commitment to an increased carbon tax while ring-fencing resulting revenues for climate actions in communities; and a just transition mechanism to support those adversely impacted.

The State has ended the issuing of oil exploration licences in Ireland’s offshore waters, though it has allowed the search for gas to continue. Apart from the Kinsale and Corrib gas fields there have been no major gas finds in recent decades though some potentially commercial oil finds were made.

Plans to build a liquefied natural gas (LNG) processing plant in the Shannon estuary and possibly import LNG through Cork have prompted widespread opposition, especially if importation of US fracked gas is involved.

Mr Bruton has indicated the Government will not support any grant application for EU funding by the Shannon LNG project until “a security of [energy] supply review has been completed and considered by the Government and by the Dáil”.

Mr Bruton said his generation was at risk of passing on a world in worse condition, which placed huge responsibilities on COP25. He said civilisation reached its most creative and collaborative level when faced with an existential threat. “This is such a time,” he added.

Referring to a simultaneous protest by young climate activists in an adjoining venue, Mr Bruton said: “We hear the call of the coming generation ringing in our ears from next door.” They were owed a debt of gratitude, he believed, for highlighting the real damage that climate disruption was causing, confirmed by hardening science.

Ireland must stand with other EU member states in calling for an increase of the EU’s 2030 target to at least a 55 per cent reduction in emissions, it said. Ireland needed to urge the new European Commission to advance a proposal to increase the EU “nationally determined contribution” target, a critical element of the Paris Agreement, within its first 100 days in office. Such a move would be “in line with the science and the EU’s fair share of the global effort”.

SCC head of policy Catherine Devitt added: “2020 marks the beginning of a decade in which global emissions must reduce by 55 per cent before 2030 if the 1.5-degree limit in the agreement is to remain at all feasible. Therefore, it’s deeply disappointing to hear nothing new from Minister Bruton’s contribution at COP25.”

To limit warming well below 2 degrees in line with science and equity already requires Ireland sustaining cuts of well above 6 per cent emissions reductions per year over the next decade, she added. “The longer we delay, the costlier and sharper the social and economic adjustment will be.”

Christian Aid’s policy and advocacy adviser, Jennifer Higgins, said Mr Bruton’s enthusiasm needed to be translated into concrete and ambitious climate action. “We’ve learned nothing new in terms of Ireland’s planned response to the climate crisis, and the existing climate action plan still places Ireland as a low performer on climate action in the EU.”

Ireland also needed to be doing far more than doubling its contribution to the Green Climate Fund, she said, “if we are to fairly contribute to efforts to prevent catastrophic climate breakdown. Ireland’s overall annual climate finance contributions will need to increase sixfold if we are to meaningfully support developing countries, who are on the frontline of the climate emergency.”