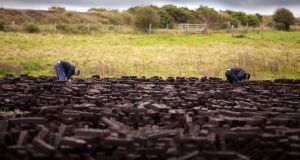 An Taisce said: “There is no future in peat, if we hope to prevent the devastating consequences of climate change and global biodiversity loss.” Photograph: Andy Newman

An Taisce said Bord na Móna’s rebranding of its business as one that is “naturally driven” was cynical.

The heritage organisation said “empty PR slogans” were being used in place of reforming the country’s “dirtiest, most polluting and ecologically damaging organisation”.

“There is no future in peat, if we hope to prevent the devastating consequences of climate change and global biodiversity loss,” he said.

Bord na Móna said it will switch to “new sustainable businesses” when it stops harvesting peat by 2030.

“Its statement that it will continue to devastate Ireland’s fragile boglands for the next 14 years to feed millions of tonnes of peat into three hopelessly inefficient, loss-making peat-fired power stations being propped up by compulsory levies on electricity bill-payers is about as far from ‘sustainable’ as it is possible to be,” Mr Gibbons said.