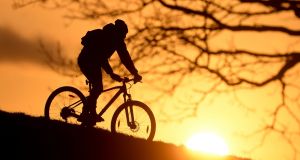 A cyclist in Dublin’s Phoenix Park as the sun sets last month. The season’s highest temperature was recorded at the Phoenix Park on September 14th at 24.7 degrees. File photograph: Alan Betson

Up to 16 weather stations had their warmest autumn in the last five years, according to Met Éireann’s provisional weather summary for the season.

Temperatures were above average across September, October and November 2020 while rainfall totals were also below average at the majority of stations.

The season’s highest temperature was recorded at the Phoenix Park in Dublin on September 14th at 24.7 degrees Celsius.

Both the season’s lowest air (-2.8 degrees) and grass (-6.9 degrees) temperatures were recorded on November 28th at Mount Dillon, Co Roscommon. All stations reported ground frost over the three months.

It was the wettest autumn since 2011 in Newport, Claremorris and Belmullet in Co Mayo, Malin Head and Finner in Co Donegal, Mount Dillon, Co Roscommon and Mace Head, Co Galway.

Both the season’s fastest gust (130km/h) and 10-minute mean wind speed (98km/h) were reported at Malin Head on October 31st during Storm Aiden.

Met Éireann said the first two-thirds of September were warm with high pressure to the south of Ireland dominating and pushing the jetstream further north. It was wet in the northwest but relatively dry elsewhere.

The final third of the month was cool as the jetstream moved south again and Atlantic low-pressure systems brought widespread rain.

“October was a cool, wet and windy month with Ireland situated under, or on the cooler northern side of the jetstream for much of the time. Low pressure dominated the first week, followed by a relatively dry period with high pressure close by,” it said.

“A very strong jetstream brought stormy conditions for the final third of the month with Storm Aiden affecting Ireland on the 31st.”

November was a mild month overall as the western half of the country saw a lot of rain off the Atlantic while the east stayed drier, it said. The month finished drier everywhere with fog and frost in places.