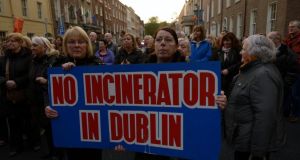 Members of Combined Residents Against Incineration outside the dail protesting against the controversial US energy company Covanta and their plan to build a monster incinerator in the Dublin Bay area. Photograph: Brenda Fitzsimons/The Irish Times

Residents opposed to the Poolbeg waste incinerator in Dublin marched on the Dáil today, stepping up their campaign to have it stopped.

Work is now under way on the €600 million facility, seven years after it received planning permission from An Bord Pleanála. It will have the capacity to burn 600,000 tonnes of waste annually and is expected to begin in 2017.

About 100 protesters, mainly residents from the Sandymount, Ringsend and Irishtown areas of Dublin, which lie in the site’s immediate vicinity, gathered outside Leinster House where they expressed determination to organise and step up their campaign.

Rory Hearne of the Combined Residents Against Incineration group said there were several reasons behind the prolonged opposition movement, including the prospect of severe local disruption of traffic.

Although the turnout was modest, the group intends increasing agitation.

“We think we can stop it and people are prepared to blockade and stop the construction,” Mr Hearne said. “I think that is inevitable if residents aren’t listened to.”

While there has been political opposition to the project, notably from Dublin City councillors who have no powers to prevent its delivery, the National Development Finance Agency approved its go-ahead six week ago and contracts were signed by Dublin City Council manager Owen Keegan.