An Bord Pleanála gives go-ahead to giant windfarm in Tipperary

Upperchurch project opposed by local group, An Taisce and nearby residents 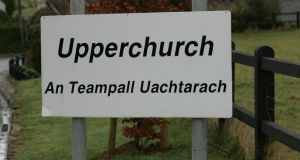 An Bord Pleanála has given the go-ahead for a giant €80 million wind farm near the Co Tipperary village of Upperchurch in spite of widespread local opposition.

The promoters of the venture, Ecopower Developments Ltd, claim the output from the 413ft wind farm – taller than Dublin’s Spire – will be sufficient to power 23,000 homes, which is equivalent to the domestic electricity requirement of north Tipperary.

The project, to be located 2km from Upperchurch village and 18km west of Thurles, will create 277 temporary jobs during the construction phase and eight permanent jobs when operational.

The wind farm will also lead to €20 million being spent on civil and electrical contracts in Ireland and annual rent payments to 37 landowners in the area, along with an annual community benefit payment.

The Bord Pleanála permission follows the appeals board granting planning permission for another large wind farm in north Tipperary where ESB Wind Development and Coillte secured planning last month for a 475ft 16-turbine farm on the slopes of Keeper Hill in the Silvermines mountains.

In total 12 appeals were lodged against the plan.

In its appeal the Upperchurch Kilcommon Wind Awareness Group said the proposal would result in a proliferation of wind farms in the north Tipperary area and “the ability of the landscape to absorb such developments will be exceeded”.

The group argued that the proposed wind farm “represents gross over-development in a populated scenic area of countryside”.

In their appeal, Gerard and Mary Ryan Cooney said they would not be able to live in their home at Knockcurraghbola, Upperchurch, due to the proposed construction of six of the wind farm’s turbines, with one of those 463m from their property.

Their appeal stated that “it would seem that a small number of stakeholders will benefit from this development. Many of the beneficiaries do not live in Graniera, Shevry, Knockcurraghbola or Upperchurch, while those who have made their homes here will suffer the devaluation of their homes, exposure to disruption during construction and documented loss of the quiet enjoyment of their lands and property.”

However, in its order the board stated that the proposed wind farm, either individually or in combination with other plans or projects, would not adversely affect the integrity of any European designated site.

The appeals board also stated that, subject to mitigation measures in the environmental impact statement, the proposed development would not have a significant impact on the environment.