‘Absolute drought’ across island by this evening, Met Éireann says 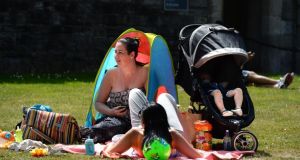 Ciara Dunphy from Ringsend taking shelter in a tent while enjoying the sunshine with friend Sutherland, at Beggars Bush. Should the dry spell continue water restrictions are expected to be initiated in a number of areas, while several local authorities have already introduced hose bans. Photograph: Cyril Byrne

Much of the island of Ireland will be in state of “absolute drought” by this evening, Met Éireann has confirmed.

Should the dry spell continue, water restrictions are expected to be initiated in a number of areas, while several local authorities have already introduced hosepipe bans.

There is no sign of the weather breaking, with temperatures expected to remain in the high 20s (degrees Celsius) into next week, according to Met Éireann head of forecasting, Gerald Fleming.

“Absolute drought” is defined by 15 consecutive days where rainfall is less than 0.1 mm at Met Éireann rainfall measuring stations.

By tonight, most of the 19 primary rainfall recording stations will show similar data, unless there is an unexpected shower. Only Malin Head, Co Donegal and Belmullet, Co Mayo will be the exceptions, as both had some rainfall last weekend.

The high temperatures - similar to the summers of 1995 and 2006 - could spark off some thundery showers, Mr Fleming said.

However intense such showers may be, they are likely to be isolated, he says.

Thus they will not necessarily resolve the difficulties faced by local authorities at a time of high water demand and low supplies, particularly Dublin and the eastern seaboard.

The Department of the Environment says it has no overall national picture, as local authorities are not obliged to inform it of water restrictions, but Galway County Council and South Tipperary County have initiated hosepipe bans.

Galway City Council initiated temporary restrictions last week in the west of the city due to a spike of up to 10 per cent in water drawn from the Tonabrucky reservoir, but this has now eased.

The challenges facing the State’s water system have been well documented - with periods of intense cold and winter flooding in the past few years exposing fundamental weaknesses.

NUIM climatologist Dr John Sweeney says while the long-term outlook is for milder winters and wetter summers, there will be “anomalies”.

He is co-author with NUIM geographer Dr Conor Murphy of a recent study on how robust our water supplies in relation to climate change, published by Environmental Protection Agency (EPA).

“The situation is very much dependent on capacity, as some areas would have excess capacity, whereas others would be on the edge - to the extent that reducing demand and tackling leakages won’t be enough to cope with even modest shifts in climate,” Dr Murphy says.

“So you might have areas like Donegal and Wicklow which are sensitive to extremes, yet Donegal is an area with greater rainfall than the east coast,” he adds. “Lack of investment during the Celtic Tiger years in water resources was a big opportunity missed.

“Our planning for water is very short-term, as there is no requirement on water managers in local authorities to take climate change into account,” he adds.

“In Britain, there is a requirement to factor in climate change. It begs the question as to whether the new body, Irish Water, will be give the investment to deal with the critical challenges.”

It says it is working closely with local authorities to collect information on the current state of the system, and intends to develop national and long-term strategy and capital planning.

It says meeting demands made by population growth, industry and commercial needs, and reducing water loss through leakage, will be among its capital planning priorities.

Other priorities will including upgrading water treatment where necessary to reduce risk of quality failures and making further investment in waste water treatment to meet EPA standards and EU regulations.