A rock pool for life to cling to

Coastal defences are making deserts of tidal zones. The solution may be simpler than we think, according to Dr Louise Firth of NUI Galway, who has developed ‘bioblocks’ 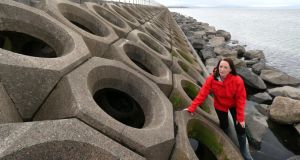 The world is changing faster than most of us realise. Humanity has been altering shorelines for a very long time, since the construction of the first one-log pier, though we still tend to imagine that vast stretches of coast remain, somehow, natural. Now, however, the 20th-century surge in commercial and recreational maritime facilities is being accelerated by our responses to the stormier seas and rising sea levels that come with accelerated climate change.

We are combating new threats of coastal erosion and flooding by armouring our shores. We do this mostly with gabions, those increasingly familiar conglomerations of cut rock or manufactured blocks, bound together with wire mesh.

More than half the shoreline of England has been altered through features such as harbours, sea walls, breakwaters and other artificial defences. Precise figures are not available here, but we are moving in the same direction. Even back in 1989 a study estimated that a quarter of the Republic’s coastline was at risk of erosion, and a programme of hard engineering solutions was initiated.

Most artificial coastal defences transform sandy shores to rocky ones. This causes a huge ecological shift, both in their communities of plants and animals and in the dynamics of the always volatile relationship between shoreline and sea. That is regrettable, but it is the price we pay for avoiding – postponing? – the consequences of our increasing greenhouse-gas emissions, as well as for our ever-increasing taste for maritime activities.

Artificial coastal defences do resemble rocky shores, in a rather crude way. But it has long been suspected that they provide habitat for far fewer species than natural rock pools and crevices, where so many children, with net and bucket, first learned to explore and love the natural world. Surprisingly, this suspicion was scientifically demonstrated for the first time only this year, in an article written in Diversity and Distributions by an Irishwoman, Dr Louise Firth.

A marine biologist from Dublin, Firth now works at the Ryan Institute at NUI Galway. Her work, with her international colleagues Richard Thompson and Stephen Hawkins, has not only established the extent of the problem but also come up with a partial solution.

Their ideas will be further tested next month, for the first time in Ireland, with an experiment on the honeycomb structures that support the causeway to the Mutton Island waste-disposal station in Galway Bay. The aim is to test whether creating microhabitats within artificial coastal constructions augments the diversity and abundance of the marine life they can support.

Firth’s ideas spring from years of collaboration with the EU-funded Theseus initiative and the British-based Urbane project, trying to make our brave new coastlines more attractive to plants and animals.

The basic reason that artificial rock or concrete structures hold much fewer life forms than natural rocky shores is simple enough. They do not form the fissures and fractures that retain water at low tide and eventually become rock pools, providing more or less permanent saltwater habitats.

Many of the solutions proposed have a happy simplicity also. One research group tried cutting garden pots in half, then attaching them to the sides of breakwaters and gabions. They lost a lot of pots in heavy weather, but those that remained secure were remarkably successful in retaining water and establishing rich microhabitats.

Firth’s approach has been simpler still: creating pool-like depressions in concrete structures. She has pioneered the development of a bioblock, a concrete cube pockmarked with niches where more forms of life can get a firm grip.

The bioblock is for new developments – engineers understandably baulk at the dangers of drilling into existing structures – but the honeycombed form of the Mutton Island causeway offered an ideal opportunity to create artificial rock pools, by pouring fast-drying concrete at low tide, using wooden moulds that create nooks and crannies when they are extracted.

The causeway also offers opportunities to test multiple variables: three tidal levels and the effects of exposure to, and shelter from, open sea.

One of the challenges facing Firth is to establish exactly where, between the high- and low-tide marks, rock pools are most productive biologically. She is keenly aware of the risk of “throwing money into the sea” by investing in microhabitats where animals will not flourish.

Her project “checked all three boxes” in Galway City Council’s draft biodiversity plan, belated because of funding cuts but due to be ratified later this year.

Stephen Walsh, the city’s acting biodiversity officer, was delighted. “Usually people give out to us, telling us what we should or should not do,” he says. “Here was someone coming to us with a funded project that met all our criteria. And it shows people that biodiversity in and around the city is not static: it is a dynamic thing.”

First, the outcome of the experiment will contribute to knowledge of the city’s plant and animal communities. Secondly, information online, and on new signage, will enhance Galwegians’ knowledge of the burgeoning life in their local tidal zones. Finally, Firth’s earlier experiments suggest that this project will indeed significantly augment these communities, both in terms of diversity of species and population size.

Firth expects for starters to see red algae, which does not develop on such structures unassisted. Juvenile crabs and shrimps should follow, along with a considerable increase in the types and numbers of shellfish.

Curiously, though, she has yet to find small fish in artificial rock pools. “We can’t ever expect to match the diversity you find in natural rocky shore habitats,” she says, “but we can reasonably hope to make a difference for the better”.

She is well aware of the criticism that the biological communities on artificial structures will always be different from those that used to exist on sandy shores. But she argues that, if the alternative is doing nothing, then assisting different communities to form is surely positive.