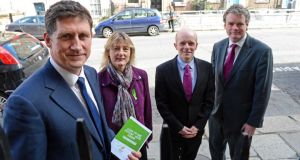 A very respectable performance by Green leader Eamon Ryan in the European elections and a poll topping Dublin City Councillor are among the results that have brought the former government party back from political obscurity.

Hard work on the ground and that essential political quality of “likability” have paid off for the party’s representatives, in the capital at least.

Tallies showed Ryan coming in third in Dublin on first preference votes, with supporters hoping his ’transfer friendliness’ will secure the third seat in the constituency by close of business today.

Patrick Costello, a social worker, was elected in the Rathgar-Rathmines ward with more than 13 per cent of the vote. He topped the poll on first preferences, although Fine Gael’s Kate O’Connell was actually elected first.

Ciaran Cuffe, a junior minister in the last administration, is now a Dublin City Councillor for the North Inner City Ward.

The party’s deputy leader Catherine Martin took a seat in the Dundrum ward of Dun Laoghaire/Rathdown and her husband Francis Duffy was elected to South Dublin County Council for Rathfarnham.

Other successes look likely to follow for the party punished by electorate so recently. With that in mind, there was a tweet of warning for the Labour Party from former Green leader John Gormley when he heard the the rumour the current junior coalition partner wanted to renegotiate the Programme for Government.

“Now where did I hear that one before? Take it from me, guys, it won’t work. It’s just going to get worse.”

The Greens abandoned their professional refusenik stance in 2007 to coalesce with Fianna Fáil. The junior partner paid a high price for what one of its own members described as a “deal with the devil” when all six Green TDs lost their seats in the 2011 General Election.

The party had already suffered a rout in the 2009 local elections, leaving just three councillors standing.

There remains a disproportionate southside Dublin, middle-class element to the party’s elected membership. Dislike of the party could remain strong outside the capital, notwithstanding the hard work of Kilkenny standard bearer Malcolm Noonan.

The “huntin’ shootin’ fishin’” brigade are unlikely to abandon a lifetime of principle to give the Greens a preference in future elections.

Despite their demolition as a parliamentary force in the Republic, the Greens have connections in an international movement. Swedish and German Greens have rebuilt at various points after electoral setbacks. The electoral fate that befall the Irish Greens in 2011, although traumatic for its members, was not unusual. The electorate can be forgiving.